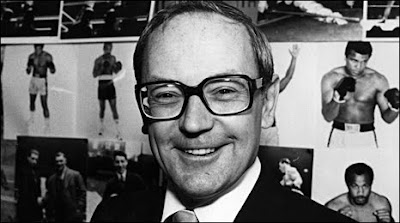 Former BBC boxing commentator Harry Carpenter has died at the age of 84.

Carpenter was the BBC’s voice of boxing for almost half a century after joining the corporation in 1949, when he first began commentating on the sport.

He retired in 1994 and died in his sleep at King’s College Hospital in London in the early hours of Saturday.

His lawyer David Wills said: “He had been unwell since last summer when he had a minor heart attack.

“The funeral has not been arranged but will be a family funeral, to be followed by a memorial service in London.”

Carpenter became closely identified with Frank Bruno, whose catchphrase “Know what I mean, ‘arry?” featured in their post-fight interviews.

The former world heavyweight champion, 48, was said to be “very upset and shocked” by the death.

“He [Carpenter] was obviously part of Frank’s up-and-coming career from the early days when Harry used to commentate, particularly at the Royal Albert Hall, on Frank’s boxing,” said a spokesman for Bruno.

“Then they became a bit of a double act with the ‘Know what I mean, ‘arry’ thing. From there they went on to do appearances together almost like a little cabaret act.”

He also referred to the moment during Bruno’s world-title fight against Mike Tyson in 1989 – which the American won – when Carpenter forgot his impartiality for a moment and cried out: “Get in there, Frank.”

“The most exciting time was probably the Tyson fight when even Harry Carpenter, who was quite a cool man, sort of lost his cool,” the spokesman added.

He added: “If you were good then he’d give you a good write-up and if not, he told you one or two truths.

“I always enjoyed his company and enjoyed talking to him. And he knew the game.”

Promoter Frank Maloney also paid tribute to Carpenter, describing him as “probably one of the greatest commentators of all time”.

He added: “His voice was so distinctive and I remember all those Ali fights and Bruno fights he commentated on.

“It’s like a piece of boxing history has been taken away.”

“We in this sport, including people like Muhammad Ali, can intuitively tell when someone loves boxing – and he was steeped in it,” added Conteh.

“I remember watching and listening back to some of my fights that he commentated on and there was always constructive, not destructive, criticism from him.”