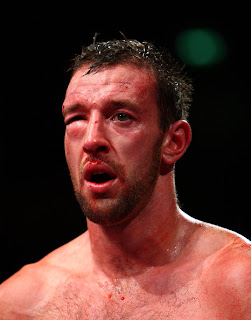 As David Haye prepares for a vital defense of his WBA heavyweight crown, things couldn’t be more different for Enzo Maccarinelli.

It was only two years ago that they were competing for the biggest purse in cruiserweight title history, a scary thought when you compare both fighters’ careers since that March night.

Maccarinelli is an old 29 year-old. He’s been beaten up badly in every attempt at honours since he was blasted out in two by Haye, so why should the tables be turned against Alexander Kotlobay (18-1-1, 12 KO), a unknown fighter that boasts a KO percentage of 66%? If Maccarinelli is successful in his European title shot, he’ll be forced to defend against Alexander Frenkel (22-0, 17 KO), another German youngster that has a stubborn punch.

The signs have been there for a while now that ‘Big Mac’ is not fit to be matched against hungry lions no more. Ola Afolabi and Denis Lebedev have displayed just that, both stopping the limited Welshman in stunning fashion.

Frenkel and Kotlobay are no better, or much worse for that fact, than Afolabi or Lebedev. Simply put, they’re your stereotypical cruiserweight. They’re heavy handed, physically strong and cover up their dodgy beards that are yet to be tested by their over-matched tomato cans. But as has happened to others like them, the step-up in class is a step too far.

If Maccarinelli does manage to pull off an almighty upset, I can assure you that the WBO will immediately catapult their favourite cruiserweight into a dizzy high ranking. Of course, he’ll have the option of defending his European strap on Sky Sports or in Germany, but the intent is to get him back into the world title frame.

But let’s get back to planet Earth, the odds are heavily stacked against the former titlist. The fight will take place in St. Petersburg, which means two things. 1. Frank Warren couldn’t care less about his former star product; 2. Alexander Kotlobay will win. An away win in St. Petersburg is as common as a Vitali Klitschko fight going the distance. It happens occasionally, but not often.

So Maccarinelli’s downward spiral seems all set to continue while his counterpart Haye is gearing up for another Pay-Per-View box office against John Ruiz.