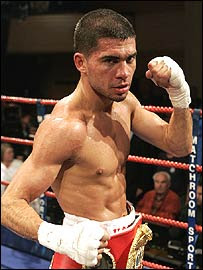 Ontario, Canada – Steve Molitor (32-1, 12 KO) got the better of Taklani Ndlovu (30-6, 18 KO) for the second time as he outpointed the South African over twelve rounds.

The fight began at Molitor’s pace; very slow and hesitant. As the rounds went by, the pace and intensity upped slightly, until the fifth, where both fighters decided to let their hands go and trade plenty of leather. Molitor landed the most punches, but Ndlovu scored with a head-rocking straight right that could’ve tipped the round in his favour.

Ndlovu upped his game as the fight approached it’s end, but Molitor’s superior defensive skills were impressive as he used his footwork to get out of Ndlovu’s range.

I don’t expect Moltior to face the highest level of competition, but he’ll be looking forward to defending his new title in front of his home fans. Considering the talent that the division holds, Molitor is behind other titlists Poonsawat Kratingdaenggym and Toshaiki Nishioka, but I wouldn’t rule him out of a contest with either of them.

Neven Pajkic (12-0, 5 KO) won the battle of the undefeated heavyweight prospects on the undercard, decisioning Grzegorz Kielsa (11-1, 5 KO) with scores of 100-90, 99-91, 99-91. Pajkic wobbled Kiesla early on and cut him early in the fight, which allowed Pajkic to run away with the fight.

Moreno and Cermeno were evenly matched throughout the fight, and look all set to agree on a rematch in the future. Cermeno thought that his relentless pressure was more than enough to win the fight, but the judges disagreed.

The judges had Moreno ahead 114-113 and 115-112. Cermeno was up 115-112 on the third card. Team Cermeno are reportedly thinking about filing a protest about the decision.

Jorge Linares (28-1, 18 KOs) rebounded from his first loss with a less than impressive ten round majority decision over Francisco Lorenzo (34-8, 15 KOs). The scores were 97-93, 97-94 and 95-95. It wasn’t controversial, but it was close enough for one judge to score it level. Linares didn’t look his usual self as he struggled to get in the groove against a declining Lorenzo, who has lost four of his last five fights.