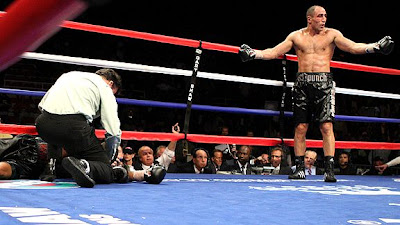 Experienced writer and analyst, T.K. Stewart, has been the first to openly criticize Andre Dirrell following his disqualification victory over Arthur Abraham at the weekend, accusing Dirrell of ‘mock pain and agony’ as he was laid flat on the canvas following a cheap shot from Arthur Abraham in Detroit.

Stewart complains that Dirrell faked injury to claim his first victory in the Super 6 Boxing Classic so he can continue on in Showtime’s 168-pound tournament.

As always, Arthur Abraham’s fan club has used this to back their poorly thought-out argument on how their guy was badly treated by Michigan officials, and how he was robbed of a 32nd career victory.

Dirrell was clearly ahead at this point in the fight and looked relatively comfortable, if slightly tired, as he hopped on his motor scooter and stayed well clear of Abraham, who stalked him looking for another dramatic knockout. The momentum was hardly with Abraham, even though he should have been awarded a knockdown in the tenth.

Stewart goes on to slate referee Laurence Cole, who made the decision to disqualify Abraham after the foul. He claims that Cole “went for the bait – hook, line and sinker”, which is uncalled for in my opinion. Cole’s job is hard enough without writers like Stewart on his case every time he gets a big fight, constantly referring to this fight for extra credibility from casual fans.

Abraham claims that he “did not see that he was down.” Is that his best response? C’mon get real. He’d been looking up at Dirrell, 6’1” no less, who had been towering over him, 5’9”, all night, but then suddenly Dirrell was clutching Abraham’s ankles. Maybe Stewart went for the bait – hook, line and sinker?

Stewart closes his article with “the boxing ring is no place for actors – especially ones as putrid as Andre Dirrell.” But the only actor I saw in the ring on Saturday night was Arthur Abraham, who complained and nagged at referee Cole about non-existent low blows. Trying to buy points from officials is a form of cheating, and because he didn’t have ‘his’ referee, frustration boiled over which ultimately led to a thundering right hand from one of the biggest punchers in boxing landing on a defenseless Dirrell.

If Dirrell was acting, he should really try to get a part in an action film, because I was sold. He was obviously not, as he still hadn’t realised that he had won moments after he regained consciousness. The twitching, the disorientation; both obvious signs of concussion, was enough for the doctors to make a thorough check on Dirrell in the ring and at the hospital.

The conspiracy theories are flooding in on forums across the web, but you only need to look at other televised fights to see why there is such skepticism of Dirrell. Francisco Lorenzo’s melodramatic actions against Humberto Soto is a prime example, even if the aftermath was as despicable. Lorenzo is the scapegoat here, but he and many others are partly responsible for making spectators doubt the true purity of one’s actions. It’s the same in other sports, not just boxing.

Was Abraham’s foul malicious? Probably not, I think it was more out of frustration than anything. It was out-of-character for a guy that has been very laid-back on Fight Camp 360, without even a mention of hatred towards his competitors. His reputation has been tarnished because of one moment of madness. It was a rush of blood to the head type of thing, nothing more.

Everybody’s entitled to their opinion, and I’m not trying to brainwash you into thinking that Abraham’s shot was intentional, but the correct decision was made. Make up your own mind, the video is here.