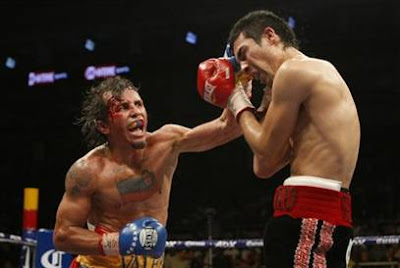 Edwin Valero’s professional record maybe perfect, but his lifestyle is definitely blemished, as the knockout machine has been placed in a psychiatric rehabilitation center for six months, where they hope to cure his alcohol and drug related problems.

El Inca had mapped out plans for capturing a US boxing license after his recent run of victories, but a failed MRI scan in 2004 still raises concerns over his safety in the ring, and the major commissions don’t want to run the risk of fatality in their state.

His actions outside the ring have not helped his cause, with Valero often in trouble with the law in Venezuela. Allegations of domestic violence rose again after his wife was hospitalized with a punctured lung. Other incidents include possession of illegal firearms and a DUI charge in Texas, which stops him from fighting in one of the most tolerant of states.

His chances of building on his best career victory over Antonio DeMarco have indefinitely put on hold. The offers were coming in and he was considered as Juan Manuel Marquez’s biggest threat to his lightweight championship, but the momentum gathered seems to be lost.

The repercussions have already kicked-in, with his planned move to light welterweight to face Lamont Peterson put on hold for now. The fight was destined for HBO, who only have interest in Valero when he fights on American soil as they like to invest in boxers they can build, and it would be a tougher sell for them to showcase Valero if he doesn’t have a US license.

The worry is that Valero’s career will rot if he can’t get the fights to advance his career, especially if his fights take place in Mexico, where the biggest names would demand that their fights take place on American turf as there’s more money in the pot. This limits his options, and without lucrative fights, HBO will steer away as he’s not an attractive investment. With Valero without a license and in no fit state to fight, his name will be quickly erased from the broadcasting shortlist.

The thought that we might not see Valero in the ring again is worrying, as he’s an all-action fighter and the sport needs exciting fighters to expand it’s fanbase. It’s disappointing that such a great talent is struggling with personal issues, but it’s good to see him getting the help he needs.

They say when you’ve got it all, you’ve got it all to lose, and one would hope that this isn’t the case with Valero. His dream of becoming a superstar hangs in the balance, as the American officials and fight fans alike wait on further developments out of Venezuela.