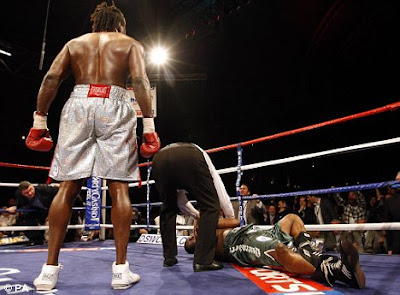 Harrison claimed that an injury to his right shoulder in the second round hindered his performance, and in some cases he only used his left hand for offence. Sprott capitalised and landed heavy counters that wobbled Harrison in the middle stages, but Harrison clawed back to score a knockout win out of nowhere.

It was a surprise, as Harrison hadn’t even rocked Sprott all fight. It was a peach of a punch, knocking Sportt unconscious and as a result, the referee quickly waved away the contest so Sprott could receive attention. Sprott got up alright and received oxygen on his stool as the result was announced.

Next up for Harrison is Alexander Dimitrenko in a tough fight that I don’t see him winning. I’m impressed with his conditioning, but his punch output is shocking and is not good enough to get him close to the top 10.

He promised to make a statement to David Haye, but he didn’t. Bar the knockout, Harrison hadn’t done anything impressive, and when you consider it, he was only a minute away from retiring from the sport.

On the undercard, Darren Barker (22-0, 14 KO) won a barnburner over Affif Belghecham (19-5, 4 KO) to claim the European middleweight title via unanimous decision. Barker started brightly but like every Belghecham fight, the Frenchman catches up as the rounds wear on. The BTBC scored the fight 116-112, as did one judge, with the others carding a ridiculously wide 118-110 and a respectful 115-113.

Nongqayi had won the title via unanimous decision against Jorge Arce, but struggled against the rangy Bouziane. According to reports, it was an evenly fought fight with Bouziane doing just enough to win the back-and-forth fight.

Ljubjana, Slovenia – IBF titleholder Jan Zaveck (29-1, 17 KO) also scored a twelfth-round technical knockout victory, but against Rodolfo Martinez (36-4-1, 13 KO). This was Zaveck’s first defense of his title since he blasted out Isaac Hlatshwayo in three brutal rounds. Zaveck dominated Martinez for twelve rounds before stopping him with forty seconds to go.

Leemore, California – Manuel Quezada (29-5, 18 KO) dropped a surprising ten-round split decision defeat to journeyman Jason Gavern (19-7-3, 8 KO), who won via scores of 95-94, 95-94 in his favour, and one 95-94 card for Quezada. Gavern was deducted a point in the second round because of a stupid WBC rule, where a fighter loses a point if his opponent is cut following an accidental headbutt. This caused a cut and immense swelling around Quezada’s eye, which reports say cost him the fight. Quezada was down in the sixth but it was wrongly ruled a slip. All in all, Quezada was never that good and Gavern deserved a wider unanimous decision.