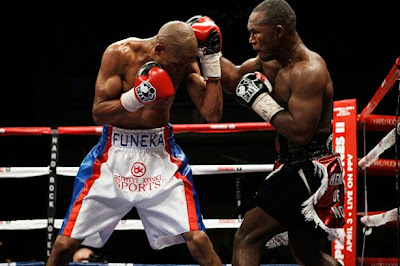 Ali Funeka and Joan Guzman defied the odds to keep the IBF lightweight title vacant after 24 rounds of exchanging leather. But the controversy caused from the two fights has riled many boxing fans, reminding us of the negative side to our sport.

The first fight raised the all-too common problem of poor scoring. The majority thought Ali Funeka had cruised to a unanimous decision victory, with Harold Lederman’s unofficial ringside scorecard at a wide 117-111, and The BTBC’s very similar. Michael Buffer announced a majority draw leaving many scratching their heads, even Guzman.

Funeka’s promoter Gary Shaw immediately filed a protest, which like countless protests came to nothing. Funeka however kept his #1 IBF ranking, and when Rolando Reyes vacated his challenger spot, Joan Guzman eagerly stepped in as his replacement.

HBO had already showed their interest in screening Funeka’s next bout, agreeing to broadcast on March 27. This was another massive opportunity for Funeka or Guzman to solidify themselves as a HBO fighter and gain further TV time in the future.

Guzman, not that surprisingly, failed to make weight for the second Funeka fight. Just a look at his previous record shows that Guzman has struggled to shed the pounds, again on HBO versus Nate Campbell. What was surprising was that he weighed in nine pounds heavy, an action of unprofessionalism and a show of disrespect towards the game and Funeka as a person.

The IBF could not let the opportunity of sanction fees go by, and decreed that the fight could take place as long as Guzman didn’t weigh more than 150 pounds by 7 am on Saturday. Funeka could fill the vacancy, Guzman could not.

Guzman was fined 25% of his purse by the Nevada State Athletic Commission (NSAC), who gave half of it to Funeka while the other half went into the NSAC’s bank account. Guzman entered the ring one, or possibly two weight classes above Funeka, who simply couldn’t deal with Guzman’s speed and power, losing a twelve-round split decision.

Recent revelations reveal that Funeka was busted for using hydrochlorothiazide, a banned diuretic that helps fighters make weight. The fight gets more meaningless after every shocking development.

HBO should come down hard on Guzman and Funeka, giving neither any broadcasting time in the future. HBO would be sending out all the right signals with regard to a fighter’s past record of failing to make weight or drug test.

It’s sad to see two fighters who fought at the highest level embarrass themselves by cheating on the biggest stage of their professional careers to try and gain an unfair advantage over their opponent.

Over the past decade, people have been crying out for a change in the boxing setup, fed-up with the way that the sport is run. But this fight is a prime example that boxing has not changed, and the same old antics keep popping up.

These weaknesses and faults were vivid in Funeka-Guzman. Poor scoring from inexperienced judges who are fast-tracked too quickly; promoters acting like managers, creating one publicity stunt after another; greedy alphabet organizations who make a living out of commission fees and a joke out of any Championship; and maybe worst of all, two ill-disciplined fighters who are willing to cheat their way to the top by putting their lives, and their opponents’ lives, at risk.

Boxing is slowly climbing out of a slump, but farce fights like this endanger any valuable progress. The boxing world needs to take a stand against the above issues, and there’s no time like the present.