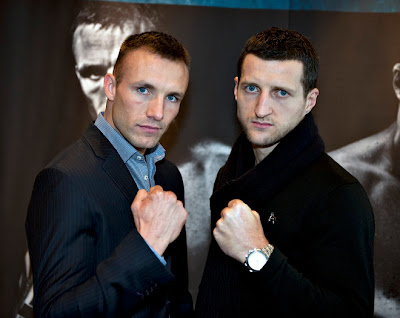 Whenever you’re dealing with elite professional boxers, the best planning you can sometimes hope for is a pair of crossed fingers and a silent prayer.

The Super Six World Classic was supposed to be different.

Six top fighters in a highly competitive, but definitely non-glamor division. No HBO/Golden Boy/Top Rank politics…Just the best fighting the best until there was one elite superstar left. It was a beautiful concept and a testament to what can be accomplished when fighters want to fight and their management isn’t afraid to let them.

Unfortunately, the Super Six tournament may be two fights away from falling apart and, if we really would’ve paid attention, the writing was on the wall all along.

As Mikkel Kessler prepares to take on Carl Froch in what promises to be a Fight of the Year candidate this Saturday, there has to be one simple question on the minds of Kessler and his team: “What if we lose?”

A loss for Kessler would mean an 0-2 mark in the tourney and almost no chance to make it into the final four. What would be the point in going on? What if there were a third loss? Kessler, who was the favorite to win it all, is facing the distinct possibility of having his career crushed.

“The Viking Warrior” has always demonstrated the same type of stiff caution outside the ring as he demonstrates inside of it. The best move, yeah, maybe even the smart move, would be to pull Kessler out and make a grab for a lesser title en route to a cushy Calzaghe-esque reign in his home country of Denmark with packed stadiums and the comfortable assurance that every other top super middleweight will be occupied with one another.

Another option for Kessler would be Lucian Bute and an attempted short cut back to the front of the 168 lb. line.

The other questionable piece of the puzzle is American, Andre Ward, but for completely different reasons.

A win against Allan Green on June 19th puts Ward up 2-0 and further cements his status as breakthrough fighter of the tournament. Things can only go downhill form there.

His next fight would be a supremely tough stylistic encounter against good friend, Andre Dirrell, but why risk it? An impressive win against Green will have HBO calling (if they haven’t been ringing the phone off the hook already).

The Miranda, Kessler and Green wins will put the Olympic gold medalist in the perfect position to make some real money and HBO has the cash and a list of potential opponents, strong enough to give Ward a real push as “America’s Next Big Thing.”

Any way you slice it, Ward and Kessler pulling out after the second round would kill the credibility of the tournament and make it little more than a parody of what it was intended to be.

When you think about it, Andre Dirrell is no sure thing to finish the tourney, either. It’s easy to envision a scenario where Dirrell, convinced of the fact that he should be 2-0, decides to explore the open market and see what’s available for a flashy, yet inconsistent, Roy Jones substitute.

Froch, Abraham and Green are likely to stay in the Super 6; Froch and Green, because there’s nowhere else to go…and Abraham, despite the loss to Dirrell, is still in the lead (at least until Ward fights).

Maybe all this is  just paranoia on my part…Maybe everybody stays put and completes their commitment to Showtime and the fans. But it sure would make business sense for some fighters to pack their things before the end of the tourney. And just how often does the good of the sport take precedent over a management team’s personal interests?