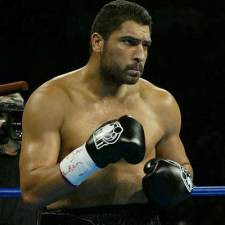 from a Press Release:

LAS VEGAS (Apr. 26, 2010) – After a professional career spanning 18 years, highlighted by becoming the first and only Heavyweight World Champion of Latino heritage, two-time world champion John “The Quietman” Ruiz today announced his retirement from the ring.

“I’ve had a great career but it’s time for me to turn the page and start a new chapter of my life,” Ruiz said. “It’s sad that my final fight didn’t work out the way I wanted, but, hey, that’s boxing. I’m proud of what I’ve accomplished with two world titles, 12 championship fights, and being the first Latino Heavyweight Champion of the World. I fought anybody who got in the ring with me and never ducked anyone. Now, I’m looking forward to spending more time with my family.

“I want to thank all of fans for staying in my corner through a long, up-and-down ride, as well as members of my family and team – my manager and legal advisor, Atty. Tony Cardinale, my brother, Eddie (cornerman), and Keith McGrath (strength-and conditioning coach) who’ve been with me so long. I also want to thank my trainer Miguel Diaz and (assistant) Richie Sandoval for teaching an old dog, new tricks, and my promoter, Golden Boy Promotions, the fairest promoter in boxing.

“I was proud to be the WBA champion twice and have the opportunity to fight 12 times for the WBA championship, the oldest and most respected organization in boxing. I’d particularly like to thank WBA President Gilberto Mendoza.”

Ruiz plans to move from Las Vegas back home to the Boston area this year and open a boxing gym in the inner city. “With my experiences in boxing,” he explained, “I want to go home and open a gym where kids will have a place to go, keeping them off of the streets, so they can learn how to box and build character. Someday, I’d like to see one of them go on to represent the United States in the Olympics. I want them to have the same opportunity to see the world that I had as an amateur. I’ve always tried to be involved in community and charity work in the past and now I’ll have more time to work with kids.

“Maybe, someday I’ll get into training, but right now I just want to spend time with my wife, Maribelle, and my children. I wasn’t around as much as I would have liked for my two oldest children, John and Jocelyn, because I was away training or fighting. Now, I’ll be around for them and my 3-year-old son, Joaquin, as he grows up. I’m going back to my roots in Massachusetts, where a lot of my family and friends live, and look forward to helping young boxers avoid some of the bad things that I experienced in the sport but help them to experience the good times, too. Boxing is brutal but also beautiful. As I look back, I’m happy about my career, and my future is very bright.”