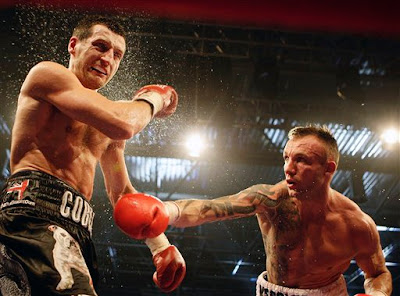 Courtesy of Lee Payton and our friends at The Boxing Bulletin:

Boxing fans were treated to another fun Saturday night with 3 competitive match-ups involving some of the sport’s most exciting fighters.

Showtime kicked things off with a delayed broadcast from Denmark where Mikkel Kessler silenced many of his critics, who called him finished and soft.  He and Great Britain’s Carl Froch delivered easily the best fight of the Super Six tournament so far.

Then it was time to switch the channel to HBO. In the opener, a somewhat surprising effort from enigmatic part-time banger Joel Julio made things very interesting for hard man Alfredo Angulo and his backers.  The main-event featured a gutsy Chris Arreola in a tussle with the smaller, but better Tomasz Adamek. The lively crowd in California enhanced what was already the best heavyweight fight in quite some time.

Let’s take a look at both shows starting with the battle from Denmark….