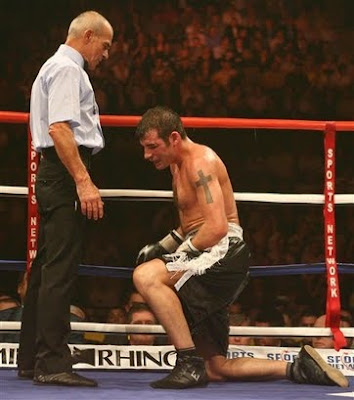 As a proud Welshman, you can excuse my biasness towards Joe Calzaghe, who’s arguably the best fighter ever produced from the British Isles. But ever since he announced his retirement from the sport on February 5th, 2009, my respect for ‘The Pride of Wales’ has been on a slippery decline.

There have always been question marks from Calzaghe’s doubters hanging over his career; about the level of opposition, his desire to fight the best the sport had to offer and his unique style of boxing. I too, am beginning to creep into that category.

His biggest career victories have decayed, maybe because of Calzaghe’s dominance in victory breaking his opponents’ mental toughness or maybe because they weren’t that good. Mikkel Kessler, in my view Calzaghe’s best win, was dominated by inexperienced, but talented, Andre Ward, and has not looked convincing for a long time. Bernard Hopkins, Roy Jones Jr. and Jeff Lacy have continued to lose respectability as good fighters, with dull performances and sloppy meaningless fights.

Calzaghe’s desperation for the limelight has seen him enter a celebrity dancing competition and create his own hit TV series, ‘The Calzaghe Clang’. I have nothing against boxers who seek a career on the box after retirement, but at least appear like you’re not doing it purely to raise your reputation through embarrassment.

An undercover investigation from News of the World, who have turned from a newspaper to a private investigation team to try and wipe out all sports, recorded Calzaghe admitting use of cocaine since his retirement. The funny thing is that nobody seemed to care. Calzaghe by now had lost my respect as a human being.

With the media awaiting his announcement out of retirement, hyped up a little by Golden Boy Promotions, I have come to the conclusion that I don’t want to see him back in the ring, especially if it’s a rematch against Bernard Hopkins.

It would be another example of Calzaghe cherry-picking his opponents as they become weaker and more fragile. Hopkins showed he had nothing much left in the tank against Jones, and Calzaghe could sniff his opportunity to get rid of the asterisk next to his fight with Hopkins by defeating him comprehensively the second time round.

If the fight gets made, why would anyone other than Hopkins and Calzaghe fans tune-in to watch the fight, when it has no relevance to the light heavyweight division whatsoever? It doesn’t mean that Calzaghe will continue to campaign at light heavyweight if he wins, with a look down the line of fighting the winner of Dawson-Pascal in late 2010.

As a fighter, I still rate him highly, and will back him because of his nationality. Joe’s undefeated record is what makes him special, and quite rightly too. Not many fighters can go 46-0 by keeping hold of a title for eleven years, and that’s what makes him hall-of-fame bound. His doubters will criticize his inclusion into Canastota, but considering his importance to British boxing over the past decade, I doubt that Calzaghe will be ignored.

Calzaghe might need to realise that a comeback fight with Hopkins tarnishes his legacy, not strengthen it, before hastily deciding to cash in on a pretty low income that the fight will generate. But I know deep down, that I would be pretty naive to think that Calzaghe would be able to avoid the ‘itch’ of returning into the square circle and the chance of tentatively adding to his collection of wins. My respect for him as a fighter has begun it’s slippery decline.