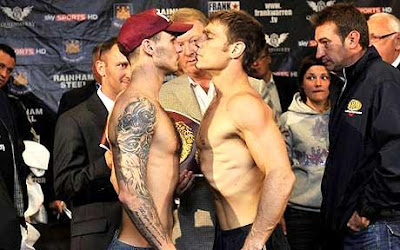 A year and a half ago, Kevin Mitchell’s dream was over. A persistent hand injury forced him to take a lengthy layoff, flirting with retirement as he slaved on the train tracks to get by. It was set to be a sad end to a promising career which had already surpassed domestic level.

Mitchell persevered through the tough times, but was still struggling to make ends meet. After his hand had fully healed, Frank Warren knew that it was time to turn his undefeated prospect into a top 10 contender. The introduction of Jimmy Tibbs was an inspired change, as the veteran domestic trainer polished the reckless wild slugger into a well-rounded boxer.

And on December 5, those world title aspirations were ignited again, this time at lightweight. He gave Breidis Prescott the boxing lesson that rival Amir Khan was supposed to play out in 2008, impressively out-shining Khan who headlined the card that night.

Mitchell could go one step further than Khan with a win over Michael Katsidis, a fighter that has constantly called out Khan to no prevail.

Say what you want about Katsidis’ goofy helmet, the guy comes to fight. His electrifying fights with Joel Casamyor, Graham Earl and Czar Amonsot has made Katsidis a fan favourite, gathering more tags as the modern day Arturo Gatti every time he steps into the square circle.

In his 28 professional outings, there has not been much ‘D’ from Katsidis. He prefers to walk through punches to land his own bombs, and this proved to be his downfall in his biggest career fights. Against the underrated then-champion Joel Casamayor,
Katsidis was flattened twice in the first, before weathering the early storm to floor Casamayor in the sixth. However, the lack of defense allowed Casamyor to consistently land power punches which drained Katsidis, forcing a stoppage in the tenth round.

The story wasn’t too different in the fight with Juan Diaz. Diaz threw quick 1-2 combinations before spinning away from Katsidis, who could not block any punches thrown by Diaz in the earlier rounds. Diaz utilized the jab to full effect, keeping Katsidis at bay to win a deserved split decision. It wasn’t the case that Diaz won the fight, it was more of what Katsidis could have polished since his defeat to Casamayor.

Since then, Katsidis has hammered home two impressive, but gruelling wins over a post-prime Jesus Chavez, and contender Vicente Escobedo, who exposed the flaws that Team Mitchell will be hoping to capitalise on at Upton Park come May 15.

Despite his background, the media have continued to turn a blind eye on Mitchell by concentrating on the Olympic silver medallist, Khan. This is Mitchell’s chance to fill in Khan’s spot as he plys his trade across the pond, completing his fairytale story in the process.