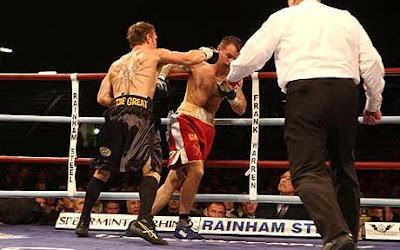 Last night, undefeated UK prospect Kevin Mitchell lost his first professional bout against Aussie hardman Michael Katsidis. Looking at both fighters records it should not be a real surprise. Yet once again, Frank Warren’s fantastic promotional skills had us all believing that Mitchell was deservedly a 2 to 1 favourite. Mitchell’s only recognizable previous opponents were Carl Johanneson and an over-hyped Breidis Prescott, was facing a fighter who has been at the higher echelons of the division since he fought Joel Casamayor back in March ‘08, and really had no business being favourite.

Katsidis, known and loved by hardcore fans around the world for his crude, all-action brawling style, relies on just four things in the ring; heart, pressure, power and one hell of a chin. Katsidis does not box, he walks straight forward and hammers you with punches. His only defense is his huge heart, and his own belief that he will knock you out before you knock him out. Some call him the modern Arturo Gatti, and it’s probably too early to say, but he is certainly making a case for himself.

In face of such a challenge, how does Mitchell prepare for by far his biggest test to date? He goes out on the town during training, and just hours before the fight he was seen with a group of his “closest friends” in a shopping mall in London, as Colin Hart reported on UK Radio Station TalkSport early this morning.

25-year-old Mitchell said after the fight that his trainer had told him five weeks ago “you have not prepared for this fight properly, you keep messing around.” For professional sportsmen, this stern warning from your trainer should kick you into gear and make you realise that you haven’t grafted enough to reach his demands. But Mitchell thought differently.

“There were things I wasn’t doing and I was having a few late nights and this has given me a kick up the backside. But I’ve got a young family and there have been a lot of rows that people don’t understand about. That’s made things hard. One minute I’m living at my mum’s, the next I’m back at my flat.”

Which begs the question as to why Mitchell was not locked away in a training camp? We have heard so much about how he struggled to earn a living working on the railway tracks while injured. Why did this young fighter who had his chance at glory, totally disregard his training, his promoter, and most importantly, the 14,000 adoring fans who parted with their hard earned wages to watch him fight?

This is not about a fighter losing, a loss is nothing, many great fighters have lost. Sugar Ray Robinson lost 16 times and yet he is the greatest boxer of all time. It is about a boxer who has totally disregarded the fans, his associates and embarrassed himself in the process.

Micheal Katsidis locked himself away for three months in Thailand doing nothing but preparing for this fight. He also has a young family, but he respects his loyal fans back at home, and wanted to prove that he still belonged at the top of the division and was focused on the task ahead. This is the reason why whenever Katsidis loses there is no backlash. We know that he comes to fight, we know he will sacrifice everything before and during the fight.

As fans, that’s all we ask, and personally, I don’t think its too much to ask for.