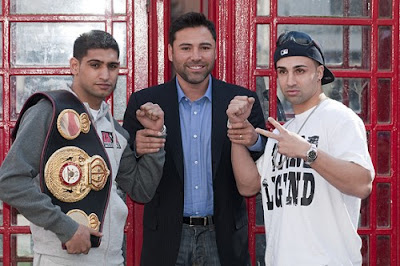 There’s a party at 168 lbs. with six of the division’s best currently involved in a hotly-contested tournament that has captured the attention of fight fans from around the globe.

In a true win-win, these six world class elites are getting the exposure they deserve and making the money they want while giving the fans the quality match-ups they crave. The World Classic Super Six Tournament really should serve as the template for the entire sport.

Dropping 4 divisions to the South, we find a jr. welterweight division which is arguably even richer in depth than the aforementioned super middleweight class. But, while the 168 lb. crew hammered out their differences and got their act together to give the fans a treat, the 140 lb. division seems to be spinning its wheels and providing more excuses than quality encounters.

So, what’s the deal?

Aside from the obvious weight difference, the only real distinction between the two divisions is that the super middleweights are free from Golden Boy and Top Rank fighters and that fact, alone, may be the difference between getting something done and just pushing around promises and reams of hype.

Golden Boy currently has its grip on three of the top 10 jr. welterweights in the world and we’re already seeing the customary foot-dragging of a promotional giant looking to protect its investment at the risk of denying the sport’s fans.

With Amir Khan and Victor Ortiz in their pocket, Golden Boy opened its checkbook and bought off the one fly in the ointment, Marcos Maidana. The Argentine slugger, who had beaten Ortiz into submission and had become the mandatory for Khan’s WBA title, was offered a one year, three fight promotional contract by Oscar De la Hoya’s promotional outfit in what many are saying is more “step aside” deal than real acquisition.

So, instead of Maidana-Khan, which was mandated and a legal necessity, we got Maidana-Victor Cayo. But wait, there’s more…

Well, hold your horses…this is big time boxing. Maidana pulled out of the Bradley fight just as the promotional hype was to begin. Citing a back injury, Maidana decided to not go ahead with the plan…and why not? All he has to do is cool his heels for the next few months and he stands to make a mint of a payday with a still-mandated, more winnable shot at Khan.

Short-term problem solved for Golden Boy; Bye bye Marcos Maidana for the fans….and, just like that, one of the division’s most exciting fighters has been muzzled and leashed.

Khan is now free to sit on Golden Boy’s pile of cash while fighting division re-treads and smaller exports from the lightweight division. Rumor has it that Michael Katsidis is being talked about next.

Now, switch to Victor Ortiz, who played Rihanna to Maidana’s Chris Brown last year and is still being shoved down the throats of the boxing public via Golden Boy’s hypnotic hold on HBO.

No fights are being rumored for Ortiz, but you can bet that no real challenges are being batted about at Golden Boy headquarters.

With a division full of home run hitters, Khan and Ortiz, two of the division’s brightest talents, are looking for batting practice with the bat boy.

Here’s hoping that Golden Boy wakes up at some point and realizes the lesson learned from the super middleweight class; You can make more money by giving the fans what they want than by trying to manipulate them into buying the hype.