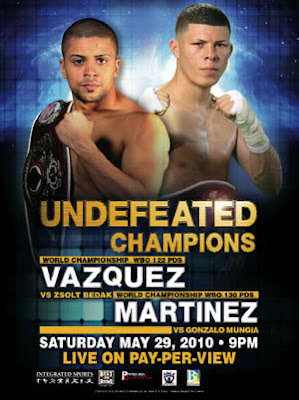 It was Vazquez’ first defense, following his four-round blowout of previously undefeated Filipino Marvin Sonsona back in February. Bedak was Vazquez’ number one contender by the WBO, which is a joke in itself, who’s best win came against Ramie Laput, who had long since been exposed as yet another fluffed record fighter from the Philippines.

Bedak was holding his own up until the fifth, where Vazquez landed a number of head-snapping right hands and left hooks. Vazquez continued his dominance until the stoppage in the tenth, dropping Bedak with a right hand and the bout was waved off.

In the age of fighters making the most of their fathers name to earn a healthy living from the sweet science, Miguel Vazquez Jr. offers something different, and behind the ‘Jr.’ tag lies one hell of a fighter that has plenty of potential to dominate the decision in future years.

In the co-feature, Roman Martinez (24-0-1, 15 KO) scored a stunning fourth-round knockout win over Gonzalo Mungia (17-7-3, 13 KO), defending his WBO junior lightweight title in the process. It was a thriller up until the stoppage, with the third round the highlight of the card as both men brawled recklessly. Eventually, Martinez had too much firepower for Mungia and overawed the Nicaraguan, stopping him in the fourth.

On the undercard, twin brothers McWilliams Arroyo (3-0, 3 KO) and McJoe Arroyo (3-0, 1 KO) continued their education of the game at the lower level as they both dominated their punchbag level opponents. McWilliams is a former Olympian and campaigns at bantamweight, while McJoe is a division south at junior bantamweight.

On a sidenote, this was a great card and well worth the £5 ($8) that UK TV charged for it. It seemed like a well organised event in Puerto Rico, with leading stars Juan Manuel Lopez and Ivan Calderon in attendance, reminding the public that they have fights scheduled for the next month or so.