Nobody would blame the boxing public if they just gave up hope and decided to declare the Klitschko Brothers champs for life, or at the very least, champs until retirement. Wladimir and Vitali have dominated the division to such an extent that there are almost literally no challengers left to oppose them.

Detractors may say that the reigning WBO, IBF and WBC champs are simply the best of a very bad crop of plus-sized pugilists…and they may have a point, but that’s certainly not the Klitschkos’ fault and it shouldn’t take away from the fact that they’ve always fought the best available opposition.

On the horizon, there’s one last wave of fresh challengers before the best available opposition drifts into the Tony Thompson, Sam Peter class of re-packaged, already-defeated challengers.

Here’s a look at perhaps boxing’s last chances to end the Klitschko dynasty:

It’s been about two and a half years since Alexander Povetkin officially became Wladimir’s mandatory challenger by beating Eddie Chambers in Berlin. In that time, he’s seen five different fighters challenge for the title ahead of him, including the man he beat in the IBF title eliminator, Chambers. Injuries prevented him from taking advantage of his shot..and that may have been for the best because, in his downtime, he’s acquired world class trainer, Teddy Atlas, and has become a better technical, more “Americanized” fighter. Povetkin’s best chance to upset Wlad is with his hand speed and improved, more diverse arsenal. Russia’s #1 challenger, Povetkin, will finally have his shot at the crown as the bout with Wladimir was officially announced yesterday and has a tentative September 18th date.

In the beginning, it looked as though the Klitschko Brothers wanted nothing to do with the swagger-heavy UK big boy. A near-slave contract was forced upon Haye as a condition for a title shot at either Klitschko, but it was ultimately financial issues that stopped the bout from happening. Now, after one-sided wins over John Ruiz and Nikolai Valuev, it appears as though Haye is the one putting the roadblocks to the fight. The real shame is that Haye has the style that just may topple whichever Klitschko he fights and has the marketability to make the bout the biggest Heavyweight encounter since, maybe, the Lennox Lewis era. The coming weeks will show us whether defending WBA champ, Haye, is willing to heed the call or if he’ll be content to just hold on to his quarter-piece of the championship pie.

The former Cruiserweight kingpin proved a lot of people wrong by having some solid success one division to the North. Victories over Chris Arreola and Jason Estrada have officially announced him as a “for real” Heavyweight, but he’s yet to really make a fuss about wanting to tangle with either Klitschko brother. If the day ever came, Adamek’s conditioning, courage and one-punch power would give him a solid shot of beating Vitali and Wladimir. His next bout is against Michael Grant in August, but, after that, a  title push could be in store for the Polish banger.

“La Sombra” is definitely the most highly decorated amateur star in the bunch of possible Klitschko opponents. There’s also nobody on the list who can put together a combination like the Olympic Gold medalist. However, talent and skill are not the issue with Solis. The Cuban defector’s weight and conditioning have suffered greatly in the move from Cuba to the USA. Scaling as high as 271 lbs. on a 6ft 1 frame, Solis’ chances diminish with every fast food meal he devours. A dedicated Solis, in the 240 ballpark, stands a real chance of beating either Klitschko.

David Tua: Pound for pound, there’s nobody who punches harder in the division than Tua and there’s nobody with a better chin, but at a squat 5 ft 10, is a title run at either Klitschko realistic?

Nikolai Valuev: The former WBA champ’s size always gives him a shot, but it’s unlikely that even a 7 ft frame can disguise the skill set of a club fighter against Wladimir or Vitali.

Denis Boystov: The 24-year old Russian power puncher has shown some spark in dominating third-tier opposition in Germany. The jury’s still out on whether he’s anything resembling “for real.”

Ruslan Chagaev: At one time regarded as the third best Heavyweight in the sport, Chagaev was humiliated in a one-sided TKO loss to Wladimir last year. He has the skills to make a run for it, but does he have the bravery, or even the desire, to make another run at a Klitschko?

After these challengers, we might as well retire the belts…there’s, almost literally, nobody else left to beat.

Discuss this topic and many more on The BTBC, boxing’s first troll-free message board for hardcore fight fans. 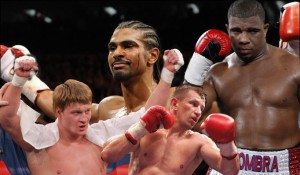