23-year old J’Leon Love shares a profession with many other young athletes, but don’t expect him to walk the same path as everyone else.

This well-regarded middleweight prospect out of Michigan has already rubbed elbows with the famous and has flirted with mainstream success, despite only having five pro fights and no real, world class promotional representation.

Love was motivated, focused, and full of energy as we chatted about everything from his photo shoot with Kate Moss to his signing with boxing power broker, Cameron Dunkin, to his own plans for world domination:

The Boxing Tribune: Ok, most sites would focus on the same cliches everyone else is asking…But we here at the Boxing Tribune are a bit different…So, to kick this off right, tell us about you and Kate Moss.

J’Leon Love: (Laughs) Well, it was just a random day at Kronk boxing gym in Detroit Michigan in 2007 and this camera crew came down to the gym. This lady was also with them with this big entourage And I had no clue who this lady was.

I have a really good personality and I stand out. So I’m the person that breaks the ice. I’m training and being silly and taking picture with this lady.

People were telling me I was taking pictures with Kate Moss, but I still didn’t know who that was. So, at the end of the day, the photographer, Bruce Weber, said he loves my personality and says I take great pics. So they flew me out to New York and had me taking tons of pictures and said I had a great career in modeling.

That’s how I had the Opportunity to model with Kate Moss.

BT: That must’ve been insane for a young kid. What was going through your mind when you realized this was a big deal?

JL: I was extra excited and so many things were running through my head. I thought, “Hey this will make me famous.” Then I was thinking my friends wouldn’t believe this and maybe Kate Moss will actually like me. (Laughs) It was a great experience.

BT: Those photos were pretty steamy…did they lead to anything outside of the photo shoot? or no comment? (laughs)

JL: No, she was 100% professional…almost acted as if I wasn’t laying on top of her. 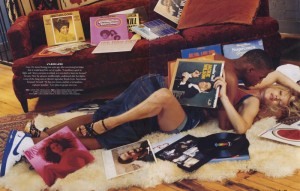 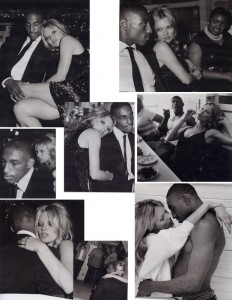 JL: I was born in a small city called Inkster, Michigan but grew up all around Michigan.

BT: You mentioned training at Kronk…Did you know at the time just how big of a deal that was? Kronk has a long history in the sport.

JL: I was brought down to Kronk gym by an Uncle and he also grew up in Detroit, so he let me know about Tommy “Hit Man” Hearns and Milton McCrory and Hilmer Kenty. He let me know what I was walking into before I went through those doors.

BT: How did you get the idea of boxing in your head? What made you choose this as a profession?

JL: I was about 11 yrs of age and I was clicking through the channels and I came across the Navy and the Army boxing against each other– and from there I was interested in boxing, but when asking my mother could I box, she wasn’t having it.

BT: Of course. How did you win Mom over?

JL: Well, my uncle and father were trying to talk her into it for awhile and finally she gave in. (laughs)

BT: Does she go to your fights or is she like some Moms…”don’t tell me about it until after the fight?”

JL: (laughs) No, my mother is used to it now. She is the loudest one in the crowd during my fights. she is front row and acts as if she is going to fight for me.

BT: You were a highly-regarded amateur in Michigan. What was your record and tell us about some of the bigger names you fought before turning pro.

JL: I have had over 100 amateur fights and lost about 10 or 12, but I have fought Shawn Porter, Dennis Douglin, and a lot of other great amateur fighters

BT: I think a lot of casual fans don’t really appreciate how hard it is to fight at any sort of competitive level. Aside from having to be in top shape, you have to be mentally prepared…Tell us about the thoughts going through your mind when you had your first real amateur bout or serious sparring session.

JL: Well, I did grow up at Kronk boxing gym where most of the boxers were animals.

You really need to have the killer mind set as if you’re unstoppable because in my first sparring session I was thrown in with the wolves. So, when it came to my first fight, in my mind, I was thinking “this guy has not
sparred the people I have sparred. I have done all my road work, sit ups and all. So, now all I have to do is get in here and destroy this guy.”

BT: That’s a special mind-set because most people don’t think like that…or they DO think like that until things get heated in the ring. How do you keep your focus to keep pushing forward?

JL: To keep focus and pushing forward you have to not get full. It’s just like eating, if you eat until you’re completely full, then you get tired, lazy, and want to rest. Me, I keep my hunger so I can keep moving and still staying strong and still have room to chew up the competition. Everyday I see guys on TV or in the spotlight in boxing that, without a doubt in my mind, I know I can beat. So, until I get there, I will keep working hard day and night.

BT: And now you have manager Cameron Dunkin behind you. How important is it to have a good team in place?

JL: I give thanks to Cameron Dunkin. He is a great guy and manager. I really appreciate him.. I am no longer with TKO boxing promotions, I’m now a free agent, I guess you can say. Having a good team behind you is very important– someone that moves you correctly and really cares about your career as if it is his or her own is very important.

BT: You were, at one point, signed with TKO Promotions. What happened with TKO?

JL: TKO was very great and treated me very well but the company had some financial problems, so, as I have a great team and manager, we got a release from the company.

BT: Ok, You turned pro in January of this year and were 5-0 with 4 KOs by May…but you’ve been inactive since then. Why the layoff? And what’s on deck in terms of upcoming fights?

JL: Well, after the release from TKO, fights are not easy to come by. I was scheduled to fight in Windsor, Canada Oct 9th but the card was pushed back to a later date. As of now, I’m still training and working hard as if I’m training for a bout. I’m looking for another promotional company to take my boxing career to the next level.

BT: And for those who haven’t seen you fight yet, how would you describe your style?

JL: My style is slick and aggressive and brawler and then at times, when necessary, I can box

BT: Who would you say are your favorite active fighters to watch?

JL: My favorite active fighter would have to be the Pac Man because he’s exciting and always comes to fight, also he is not afraid, doesn’t dodge anyone and is willing to fight the best.

BT: Ok, our readers will be looking to follow your progress…Any final words for the fans and readers of The Boxing Tribune?

JL: First, I want to thank The Boxing Tribune and also my fans and friends and family. Becoming a world champion is not an easy road but I will continue my journey to the top. It will be very Exciting, so tune in.