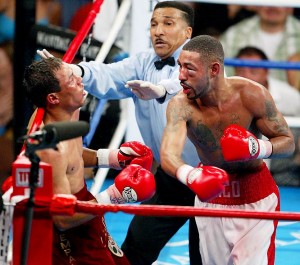 Awhile back I wrote a very similar article for another publication. Now that I’m on to bigger and better things, I thought I’d revisit this premise and add on a few details that I left out the last time.

So, here’s my daydream-influenced thoughts on what I would do if someone, somewhere gave me the power to restructure and reform boxing:

Everybody talks about the need for a commission, but what does that really mean?

It means standardized rules and regulations, uniform training for officials, more enforceable penalties for violators of the rules, a workable and unbiased ranking system, stronger health and safety procedures for participants and a credible and independent liaison between the sport and the press.

First, we have to establish the difference between a manager and a promoter. A manager looks after his fighter, finding the highest paying fight for the least amount of risk while a promoter’s job is to make a fighter and all of his fights as bankable as possible.

In recent years, promoters started signing fighters to exclusive contracts, thereby becoming pretty much a second manager. The result is two tiers of protection for the fighter as manager and promoter look to protect their investments.

My solution is to make the promoters bid to make specific fights and to completely cut out the exclusive promoter/fighter concept. This would make the promoters concentrate on making quality fights that they will go all out to actually promote.

By representing the fights and not the fighters, the promoter’s only responsibility would be to make quality fights. Established fighters would have trouble getting fights with hand-picked tomato cans because it wouldn’t make monetary sense to any promotional company to represent any such mismatch.

The ever-present shady decisions would also be cut down since the promoter footing the bill for the officials would no longer have any personal stake in either fighter winning.

The end result of this change would be many more well matched-up, competitive bouts with more money and greater freedom for the fighters while providing more quality, easier accessible cards for the fans.

Make steep penalties for fighters who pull out of fights

There is no bigger buzz kill than when a fighter pulls out of a big fight a week or two before fight night. It’s not fair to the fans, to the promoters and to the opponent who is left without a payday.

I propose automatic suspensions and/or fines for fighters who pull out of fights for non-medical reasons after reaching a previous contractual agreement. Similar sanctions could be made against fighters who habitually fail to make weight.

All fighter injuries must be verified by the commission’s doctors and, only then, will fighters be given permission to pull out for medical reasons.

One of the basic steps in bringing boxing back to the mainstream is to start acting like other legit sports. Having a strong and principled media is key to this.

The current crop of boxing media is made up of shills, aspiring shills, and dopes. Obviously, there are good boxing writers and broadcasters out there, but you can count on one hand the number of boxing media who actually employ any sort of journalistic integrity to their job.

It’s a no-brainer that the fans need the actual truth when it comes to what’s happening in the sport.

You can’t force the media to be “fair and balanced,” but you can certainly establish measures to limit the conflicts of interest so prevalent in boxing.

In every other sport, advertising for each team or sanctioned event has to be approved by the commission. Advertising is closely monitored precisely to prevent teams and/or players from literally buying positive press.The commission can’t control the media outlets who choose whether to be idiots or not, but it can control its participants when it comes to their interaction with theses media outlets. Attempts to circumvent these rules, would result in a sanction against the offending parties…As it is now, promotional companies are literally subsidizing most of the boxing media.

Begin a retirement pension plan for all ex-fighters

The worst possible ambassador for the sport is a middle-aged fighter still fighting for a paycheck or a destitute ex-champ making a fool out of himself for  money.

This problem can be eased by taking 10% of fighters’ purses for 10 and 12 round bouts, putting that money into an untouchable trust fund and giving it back to him 5 years after his last fight.

Go back to same day weigh-ins

The only real reason for having the weigh-in the day before the fight is for promotion. Schedule a press conference instead and make the fighters hit the scales on the morning of the fight.

This would be a safety measure to ensure against fighters draining themselves to make an artificially low weight and then re-hydrating themselves all in the matter of about 24 hours.

This goes along with the idea of the national commission, but the importance of a universal and fair ranking system can’t be overemphasized. Fans and press alike need to know who the fighters are and how they rank before they can be sold on a fight or fighter.

The independent ranking system would be handled through the commission and, without tooting my own horn, would assume the same structure, form, and rules of our current Boxing Tribune World Rankings in order to eliminate personal opinions, bias, and other outside factors when determining rankings.

Cut back on the number of weight classes

I’m not proposing a return to the original eight weight classes, but things could certainly be tightened up, especially in the lower weights.

There are only ten pounds differentiating the bottom four weight classes from strawweight to super flyweight. This could certainly be cleaned up a bit and split into two instead of the current four.

We’d be left with a jr. flyweight division maxing out at 110 and a flyweight division with a limit of 115. This would also make for a deeper talent base and, perhaps, better fights that can begin to draw in American and European audiences.

Other changes could also be made, but the biggest weight-related problems tend to be in the lower divisions.

The Olympic system stinks, but there aren’t too many better promotional tools than a Team USA finishing the Olympics with a handful of gold medals.

Encourage current and past pros and trainers to work with the kids to give them a better chance in the games and to help ease them into the pros.

Scoring even rounds is just lazy judging. There is always something that sways a round one way or another. Less even rounds means less scoring abnormalities.

Significantly boost efforts to publicize the sport to the mainstream

Use every tool at our disposal to get the sport out of the marginal column and on to the TV screen.

Every effort should be made to expose the public to the greatness of the sport and the fascinating lives of its participants. Aggressive marketing and smart, targeted, campaigns to the media and the general public could be used to get the sport more exposure.

The idea of being Commish may be a daydream-induced fantasy, but here’s hoping the higher-ups in the sport take at least a couple of these suggestions to heart.