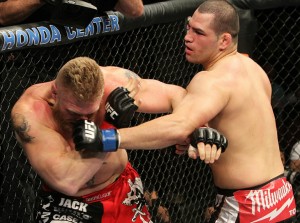 When Cain Velasquez pummeled and humiliated Brock Lesnar at UFC 121 last Saturday, he also unintentionally notched a huge point in favor of boxing in the ongoing virtual war between MMA and boxing.

It was an easy fight to view and analyze, even for a relative stranger to the sport of MMA and to the UFC brand.

Lesnar came out fast and hard, trying to use his size, brute strength, and wrestling expertise to get Velasquez on his back and under the full weight of his massive frame.

When his opponent blocked the take downs and the actual fighting started, Lesnar was clueless.

The California native, Velasquez, pounded a panicked and exhausted Lesnar into a bloody mess and forced the referee to call an end to the fight with just under fifty seconds left in the first round.

More salient, informed points have already been made by Ryan Kennedy of Fight Hype, but what we learned from this fight, as it pertains to boxing, is that a quality boxer would really just need one skill, the ability to block a take down, in order to handle the best of the MMA crop. However, the MMA-fighter, in most instances, would need to learn an entire discipline in order to hang with boxing’s best.

Throw out the freak show of Randy Couture vs. James Toney, as it was genetically-engineered by Dana White to make boxing look bad, Velasquez-Lesnar showed us the difference between fighting and combat. When forced to dig deep down inside and come back, the UFC’s “Baddest Man on the Planet” had nothing.

Aside from the obvious and well-traveled boxer vs. MMA fighter debate, the Lesnar beating also may have further exposed some of the negative aspects of the UFC juggernaut.

The architects of the UFC brand did their best to construct a sport that would shy away from all of boxing’s perceived flaws. They wanted a fast-paced whirlwind of battle to hold the interest of even casual fans…but in turning a marathon into a 100 yard dash, they also ensured that the fans would be pretty much shielded from ever seeing the heart and soul of the fighter.

UFC fans simply don’t know what kind of warrior spirit most of their favorites have because the sport has been structured away from the long, grueling wars that have defined boxing over the last century or so. It’s easy for a skilled athlete to be tough for a couple of minutes at a time; The real test begins after exhaustion has set in and the fighter can no longer rely on pure athleticism.

It’s a sure thing that there are UFC stars just as mentally tough as Arturo Gatti or Jake Lamotta, but the fans will never be allowed to see that side of their MMA stars. The UFC bouts are designed to be short and quick, appealing to the diminishing attention span of the American public.

As a result, the fans have no idea whether a “Baddest Man on the Planet” is simply a tough-looking poser or a true warrior. In boxing, the truth always comes out and pretenders are well-exposed long before reaching superstar status.

This also points to the fact that, honestly, much of the motor power of the UFC machine is really nothing more than good, old fashioned marketing. Cain Velasquez exposed that fact by easily peeling back the veneer of the Brock Lesnar hype machine.

The fact of the matter was that Dana White and the UFC were selling Brock Lesnar as a superstar before he had ever proven himself as a fighter. Even despite a loss in his UFC debut, Lesnar was heavily marketed and promoted right into a title victory two fights later.

Despite boxing’s problems (and there are many), we’d never see US Olympic Medalist, Deontay Wilder get to a world title without first earning his way to the top. And even if he did somehow get that shortcut to the top, you could expect him to be easily battered senseless by fighters who are actually battle-hardened veterans.

In the UFC, an untested and undeserving Brock Lesnar not only became a superstar world champ, but the figurehead of the entire company. He rolled through two defenses before finding someone who could nullify the one thing he could actually do well and he simply lacked the ability or desire to dig deep down inside when the blood started to flow.

This begs the question of whether Brock Lesnar’s rise to the top was a product of an embarrassingly shallow talent pool in the UFC roster or the overriding genius of Dana White to market an inferior product to the masses. Maybe it’s both.