Three interesting bouts featuring name fighters have been finalized for an already fan-friendly month of November. None are Earth-shattering, but all are solid affairs with main stage implications down the road.

On November 19th, former WBA champ and current #1 contender for David Haye’s heavyweight title, Ruslan Chagaev (26-1-1, 17 KOs) will take on Travis “Freight Train” Walker (34-5-1, 28 KOs) in Hamburg, Germany. While this is little more than a stay-busy fight for Chagaev, Walker always puts on interesting performances and Chagaev is only one fight removed from his awful pummeling at the hands of Wladimir Klitschko in June, 2009 and a battle with Hepatitis before that.

November 20th brings a battle between two 2nd-tier fighters looking to make one last attempt to climb out of club fighter status. Curtis “Showtime” Stevens (21-3, 15 KOs) will be looking to rebound from his shocking, one-sided loss to Jesse Brinkley in January against Elvir “The Kosovo Kid” Muriqi (37-5, 23 KOs), who hasn’t fought in over a year, but is always good for a game performance. Stevens-Muriqi will be held at the Aviator Sports Complex in Brooklyn, NY.

Former lightweight champ, Nate Campbell (33-6-1, 25), will be a part of the Marquez-Katsidis undercard on November 27th at the MGM Grand in Las Vegas. The 38-year old “Galaxxy Warrior” will take on hard-hitting journeyman, Walter Estrada (37-13-1, 25 KOs). 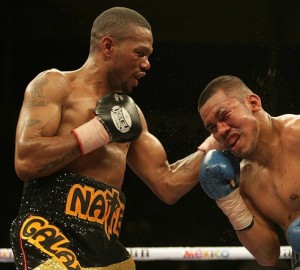