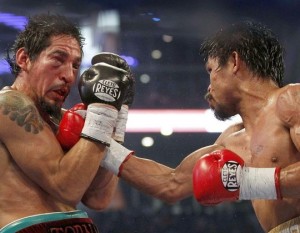 Recap: Pacquiao used his speed and versatility to utterly dominate a game, but overmatched Antonio Margarito. Pacquiao called the shots throughout, making a bloody mess of the Tijuana native, especially under the right eye. With Pacquiao gaining in confidence and Margarito growing tired, the fight could’ve been stopped at any point after the 10th. But, with the support of his trainer, Robert Garcia and referee Laurence Cole, Margarito fought on. Pacquiao, who had begun looking to Cole to stop the fight in the 11th, clearly carried a facially deformed Margarito in the 12th, opting not to dish out more punishment than necessary to win the round. Judges’ scorecards reflected the one-sided nature of the bout: 120-108, 118-110, 119-109. The Boxing Tribune also scored it 119-109 for Pacquiao.

What this means to boxing: A vacant WBC jr. middleweight title, since the belt was handed on a platter to the winner of this contest. Pacquiao has no intention of continuing at 154 (not that he ever made the jr. middleweight minimum to begin with), but announced that he would keep fighting on.  Bob Arum now begins to rebuild Margarito as a contender again, sure to use the “He never gave up” angle.

Recap: After winning the first two rounds comfortably, but completely punching himself out against a semi-stunned Soto Karass in the second, Jones zombie-walked his way through the middle rounds before waking up in the last two. Judges’ scorecards were: 94-94, 97-93, 94-95. The Boxing Tribune scored the fight 96-94 in favor of Soto Karass.

What this means to boxing: Jones showed himself to be a “not ready for primetime player” with this uneven performance while Soto Karass reached his high-water mark as an entertaining, but limited A+ club fighter. Andre Berto would be wise to take Jones up on his desire to challenge for the WBC welterweight title.

Recap: Famed amateur legend, Rigondeaux, controlled the action when things were nice and calm, but when things heated up, he showed plenty of chinks in the armor. The Cuban exile would drop Panama’s, Cordoba with a body shot in the fourth, but never really put on any sort of sustained pressure. Cordoba, who dropped Rigondeaux briefly in the sixth (for the first time, allegedly, in his entire life as a boxer), couldn’t cut off the ring and spent prime moments in the fight chasing his mobile prey. Scores were all over the place: 117-109, 114-112, 112-114. The Boxing Tribune scored the fight 115-111 for Rigondeaux.

Recap: In an even weaker performance than anticipated by some, Audley Harrison was blasted away by WBA heavyweight champ, David Haye, in the third round of a fight where Harrison simply did not throw punches. Haye put the reluctant former Olympic Gold Medalist away with his first legit flurry of offense, dropping Harrison in the third and putting the finishing touches on moments later.

Other fights of note: