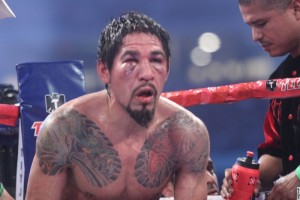 Last Saturday we saw two one-sided contests, promoted to the max and sold to the masses as something more than the mismatches they actually were.

On the main stage of Cowboys’ Stadium, we saw a completely overmatched Antonio Margarito literally beaten to a bloody pulp by Manny Pacquiao over twelve one-sided rounds.

The beating was so one-sided that Pacquiao, looking to referee Laurence Cole for a stoppage in the eleventh, actually carried Margarito in the twelfth, opting to not dish out any more punishment than absolutely necessary to win the round.

Pacquiao fought a masterful fight, for the most part, employing the exact perfect strategy to beat a guy like Margarito. However, despite the millions spent on promotion and the massive effort by Top Rank to sell Margarito as something other than the disgraced, fatally-flawed fighter that he is, the truth came out in the ring. All credit goes to Pacquiao for actually executing the game plan, but he did his awesome deconstruction against someone who, simply, did not belong in the same ring with him.

Margarito was an already limited fighter, exposed and battered in his last big bout with Shane Mosley, and possibly missing the cheat that put him up on the main stage in the first place. The “Tijuana Tornado” that we saw climb into the ring against Manny Pacquiao was merely a competent, physically big, well-conditioned fighter with a big name, thanks to the efforts of his promotional company. There was nothing to suggest that he would be at all competitive with the Filipino superstar.

Bob Arum and Top Rank, with the help of the media and a surprisingly bigger-than-anticipated group of willing fans, made Margarito into something that he wasn’t. And you simply can’t put a pretender in the ring against someone like Pacquiao without expecting something bad to happen.

Earlier in the day, defending WBA heavyweight champ, David Haye, walked all over former Olympic Gold Medalist, Audley Harrison, and put him away in the third round with the first real offensive flurry offered up.

In the weeks and months leading up to this bout, the promoters worked overtime, actually making some believe that the inconsistent, unmotivated “A-Train” was a man reborn and that, this time, they’d see fire in Harrison’s eyes.

Of course, once the bell rang, the real Audley Harrison appeared, covering up throughout, landing maybe two real punches during the entire fight and crumbling to the canvas as soon as Haye decided to throw some meaningful punches himself.

The beautiful thing about boxing is that the truth can’t be hidden for long and, sooner or later, the hype gets stripped away to reveal the reality behind even the best designed promotional plans. Harrison, like Margarito against Pacquiao, was revealed to be a mere poser, someone assuming the role of a meaningful challenger for the benefit of those calling the shots.

Unfortunately, for every pretender pushed into a spot where he doesn’t belong, there’s a real challenger who didn’t get his fair opportunity because someone else was play-acting in his place.

That’s why it’s preferred that guys, actually qualified to fight one another, step in the ring together. It’s not out of some compulsive need to follow rules, although it would be nice to have some order and/or follow the actual rules of the sport, but doing the right thing in matchmaking assures that you don’t get guys taking sustained, one-sided beatings or others who are just looking to cash the check while waiting for the right time to bail out.

In these cases, the promoters aren’t really to blame for this mess– They’re looking for the easiest opponent who brings the most money for their fighter. Then, the promoter sells the fight to the masses as something worth the asking price.

No, the blame for what happened Saturday falls squarely on the media, who fawningly passed along Pacquiao-Margarito/Top Rank bullet points as actual news stories and bought into every Haye-Harrison mock scuffle. In the case of Pacquiao-Margarito, the “experts” in charge of informing and educating the public were, themselves, swayed by as little as a muscular Margarito throwing punches at mitts and by every rumor and half-truth coughed up by those looking to promote the fight.

Those guilty parties in the media passed off two easily-readable mismatches as competitive bouts, sold the public on them, and then, post-fight, went into overdrive to save face by gushing over the two favorites as if they had actually done something shocking or relevant.

As Lance Williams of The Body Blow podcast said, Pacquiao-Margarito and Haye-Harrison were merely business arrangements. Two money-makers to line the pockets of all involved while assuming as little risk as possible for the respective cash cows.

And there’s nothing wrong with lining one’s pockets– after all, boxing is called prize fighting.

However, while Margarito and Harrison play-acted the part of legitimate threats, there were plenty of real threats out there who could’ve given the fans truly competitive, meaningful, and thrilling battles that would’ve spotlighted the resolve of two of the sports true superstars.

Yesterday, the pocket’s gain won out over the fans’ loyalty and support…but isn’t that almost always the case these days?

If you enjoyed this, you’d also enjoy: