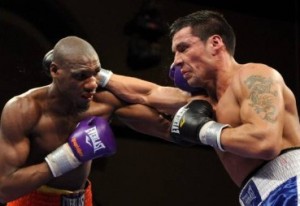 Unlike much that has happened recently in the world of boxing, Williams-Martinez is actually something to feel good about.

Looking at boxing’s last major fight, the Pacquiao-Margarito affair, The Unholy Trinity of Boxing (Bob Arum, WBC President for Life, Jose Sulaiman, and Texas Commission head, Dickie Cole) joined forces to elevate the level of sleaze in the sport to a new level.

They brought us the “marvel” of a 6 to 1 mismatch that played out, exactly, like a 6 to 1 mismatch and slapped all hard-working, hardcore fight fans in the face by giving them the “privilege” of seeing a 7-figure payday handed to Edward Plaster-hands (Margarito).

But, fret not, the storm clouds have started to lift and there’s cause for optimism as boxing kicks off a 5-week stretch, filled with competitive and attention-worthy fights to close out a very disappointing year in the sport.

And it all kicks off this Saturday, November 20th, as Sergio Martinez defends his WBC middleweight title against Paul Williams in a rematch of their 2009 Fight of the Year candidate.

Williams took the first bout by the slightest of margins, but a ridiculous 119-110 score in favor of Williams by judge Pierre Benoist brought controversy to the otherwise stellar encounter. Now, they’re all set to do it again, eleven months later and in the very same ring at the Boardwalk Hall in Atlantic City.

The buzz among hardcore boxing fans is strong and anticipation is high. The experts are divided in their predictions and, while the media hype is nowhere near as strong as for the previous week’s 6 to 1 “mega-fight,” the fan base is unanimous in their excitement.

It’s the way boxing should always conduct itself: Two prime, elite fighters at the top of their game, meeting on a completely even playing field. These are the fights that provide sparks and win new fans for the sport. It’s the way boxing used to conduct itself before pre-fight stipulations and contract negotiations became as much of a factor as a strong jab and slippery defense.

Granted, there is a rather arbitrary 158 lb. catchweight stipulation attached to this one via Team Williams (supposedly to allow Williams for an easier return to 147 if he should land a major bout with either Floyd Mayweather or Manny Pacquiao). But, other than that, this promotion has been all about boxing and what one side plans to do to the other.

Both Martinez and Williams share the distinction of being pound-for-pound fighters without the ability to really showcase their talents to audiences outside of the hardcore boxing fan base. Opponents are hard to come by for these two southpaw talents and, with more established, name fighters unwilling to risk their status against them, they are forced to do what they can to make a living.

Williams has drifted back and forth among three weight classes (147, 154, and 160) to find fights and, still, the best he can do is take bouts with other tricky, veteran southpaws that nobody else wants to fight and veteran former champs with their backs against the wall. His recent resume reads precisely like that of someone desperate to find meaningful fights: Antonio Margarito and Carlos Quintana at 147, Verno Phillips and Kermit Cintron at 154, and Winky Wright and Sergio Martinez at 160.

On the other side of the ring, Martinez, who didn’t even begin boxing until he was 20, has also struggled to land the fights that would propel him to the next level. As a talented, but raw, prospect in his native Argentina and after only having 5 years, total, boxing experience, he was thrown in against a much more seasoned Antonio Margarito in early 2000 and stopped in seven. The loss sent Martinez back to Argentina and back to obscurity for eight more years, until he stopped Alex Bunema for the interim WBC jr. middleweight title in 2008. Since then, the 35 year old has been making up for lost time by taking on the best of the best among those willing to fight him. He was screwed royally in an extremely controversial draw with Kermit Cintron that saw him knock Cintron out, but have the referee re-start the contest minutes later, after Cintron’s corner successfully (and incorrectly) convinced the official that the KO was the result of a headbutt. He would then lose to Williams in a tight, back and forth war and follow that up with an impressive win over Kelly Pavlik at middleweight to take Pavlik’s lineal middleweight crown.

What Williams and Martinez have learned over the years, though, is that big wins and impressive performances don’t necessarily equate to big money and super-stardom. Without the proper connections, neither has been able to land the one, big fight to propel them to that next level of fame.

So, in the meantime, they fight one another once again in an honest-to-goodness even-money fight for Martinez’s middleweight title.

Regardless of who pulls out the victory this time, fight fans will finally be in the most unusual of all positions– an honest to goodness win-win situation.

Why Jose Sulaiman is Pushing Sergio Martinez Out the Door