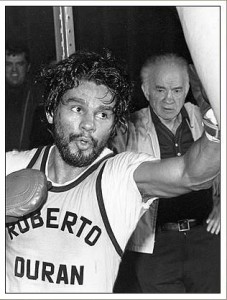 Following up on the Micky Ward bio film, The Fighter, plans are in the works for another boxing film to soon be in production.

The life and times of Panamanian Hall of Famer, Roberto Duran, will be chronicled in “Hands of Stone,” a film to be directed by Jonathan Jakubowicz (Secuestro Express). The movie will focus on Duran’s early life, starting with his youth on the streets of Panama and culminating in his in-ring campaigns from lightweight to welterweight.

Gael Garcia Bernal (Babel, Letters to Juliet, The Motorcycle Diaries) has been pegged to play the role of Duran while Al Pacino is rumored to be interested in playing trainer Ray Arcel. Duran’s son, Robin Duran, will be the film’s associate producer.

Director Jakubowicz, who also wrote the screenplay, describes Duran as “a legendary hero for those who believe a culture’s honor can be fought in the ring.”