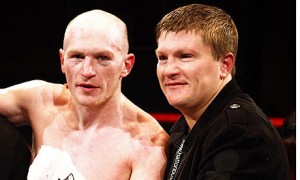 “He had no amateur career to speak of and had to learn as a professional which is hard enough. Now he is coming into his own and is a late bloomer. Matthew has achieved more than anybody could have envisaged in their wildest dreams. He is physically stronger and looks the part now.If he won a world title I would be as proud as I was myself everytime I won a big fight.”– Ricky Hatton (on brother, Matthew)

“That was a despicable thing to do. He was clearly losing and tried to get some kind of advantage.He was cut and badly bruised against Dirrell, but then stooped to a new low in order to get the ­better of his opponent.I can tell you one thing for certain: if he ever tries to pull that kind of stunt with me I will quickly sort him out.” — Carl Froch

“I want to erase the memory of that Dirrell fight and the only way to do that is by beating Froch.” — Arthur Abraham

“I’ll win by knockout. It would be a total destruction”– Sergio Martinez (on a potential fight with Manny Pacquiao)

“After everything that happened with the handwraps I am glad he got his ass beat like that. He had it coming.”– Kermit Cintron (referring to Antonio Margarito)

“If you have insomnia, watch Devon Alexander fight. [You’ll be asleep] after the first,”– Alex Ariza (Pacquiao strength and conditioning coach)

“Whether there are two or 100,000 fans in the stands makes no difference to me because I will still come in here to do my job” -Andre Ward

“To me, Hasegawa is like any other fighter: two legs, two feet, two hands, and one head” — Juan Carlos Burgos

“I have to show my daughter that I am strong and show my wife my will power. I am not thinking about my mother right now. I am thinking about the fight.” — Hozumi Hasegawa (who recently lost his mother)

“I will win the fight because the belt simply looks better on me,”–Takahiro Aoh (on WBC super featherweight) title fight with Vitali Tajbert.

“It was one tough camp and a lot of people know that there has been a fair bit of speculation (if I would fight) after my brother’s death. It was tough and as everyone knows, nothing is ever easy. We’ve endured to some tough times and we’re here to win.”– Michael Katsidis

“It’s all about the best deals, the best fight that makes the most economic sense. It has nothing to do with color. We won the title from Ledwaba, a South African, and we beat Joshua Clottey. So, with those two, we’ve beaten two black guys. But this is a sport, so lets get on with the sport.”–Freddie Roach (on Bernard Hopkins’ claim that Manny Pacquiao has avoided slick African American boxers)

“I see Groves has found his voice again now I’m fighting Paul Smith. He always seems to pipe up when he can’t fight me. But when I’ve beaten Smith, I’ll give Groves the opportunity again to get knocked out…it will be a real pleasure shutting his mouth once and for all. He keeps using my name to get himself in the papers because, quite frankly, he’s not going to get talked about talent wise. Anyone who saw his fight with Kenny Anderson would know that he’s got about as much chance of beating me as he has winning a beauty contest.” — James DeGale (on fellow super middleweight prospect, George Groves)

“Julio Cesar Chavez Jr., supposedly, is Sergio’s mandatory? I would get arrested if I promoted that fight with Chavez. That would be murder.” — Lou DiBella