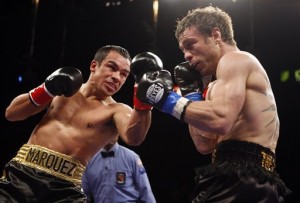 Recap: In an absolutely masterful performance, Froch dominated the German former middleweight champion and former Super Six #2 seed in twelve one-sided rounds. Using an improved jab and a dedicated attack to Abraham’s body, Froch picked his opponent apart and dominated throughout, nearly doubling Abraham over a few times in the later rounds. Abraham’s offense was isolated to a few brief bursts late in the fight that fell well short of their intended goal. The judges’ scores reflected the one-sided beating: 120-108, 120-108, 119-109. The Boxing Tribune also scored it 120-108 for Froch.

Recap: In a thriller between two real pros, WBA/WBO lightweight champ, Marquez, proved that superior fundamentals trump all else in the sport of boxing. Katsidis, dedicating the bout to his recently deceased brother, put exceptional pressure on his opponent, even dropping the 37-year old Mexico City native hard in the third. In the end, though, it was Marquez’s superior skills that made the difference, winning all but two of the rounds and gradually chipping away at Katsidis’ physical resolve. Referee Kenny Bayless made the perfect call by stopping the bout in the ninth, after Katsidis was clearly hurt, but refusing to go down in the face of some sharp, damaging blows by Marquez.

What this means to boxing: Marquez wants Pacquiao. Who knows what happens there, but if he can’t get it, Marquez, for his own well-being, should explore a soft touch next. Maybe a vanity fight with aged former heroes, Marco Antonio Barrera or Erik Morales. But expect Golden Boy to push Robert Guerrero on Marquez if a Pacquiao deal can’t be made. For his part, Katsidis lost little career momentum with his gutsy performance. Most fans will still be more than willing to watch him fight again as soon as possible.

Recap: As widely believed, Berto was too much for the limited Hernandez. The undefeated WBC welterweight champ punched right through his challenger’s guard to end the fight via right hook in the first.

What this means to boxing: Forget about Pacquiao, Berto’s next big fight will have to be against whoever doesn’t get the next shot at Manny. Possibly, a bout with Shane Mosley will be re-explored or an attempt to lure the winner of the jr. welterweight battle, Timothy Bradley-Devon Alexander, in January.

Recap: In the shocker of the evening, and maybe the year, the 13-1 underdog, Jason Litzau, scored surprise split decision victory over former world champ, Caballero. Litzau came into the fight motivated and focused while Caballero didn’t really seem to be taking the fight seriously until late in the ten rounder. The judges’ scores were: 97-93, 96-94, and 94-96. The Boxing Tribune disagreed with the official decision and scored the fight 96-94 for Caballero.

What this means to boxing: Although the fight was officially at jr. lightweight, Bob Arum’s featherweight duo of Juan Manuel Lopez and Yuriorkis Gamboa get to breathe easier. Litzau, with a draw against Rocky Juarez and a win over Caballero in his last two, could soon be in line for a shot at a 130 lb. title.