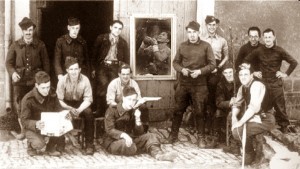 It’s 3 am and the cold breeze is blowing in from under the door and around the cracks in the window frame. I get up from a sheet-less bed and open the door.

“We have to go,” says the shadowy figure at the door. “No time to pack. Our position has been compromised.”

I step into my shoes, grab the duffel bag of wrinkled clothes kept next to the bed and walk out into the frigid December air.

I’m hustled into the back of a white delivery van that used to be, in better times,  a 1-800-FLOWERS van. Somebody else is already sitting in the darkness, a plastic bag of clothes and food at his feet.

“Where are we going?” I ask while blowing some warmth into my cupped hands.

The voice in the darkness whispers back, “Don’t know. Away from here.”

We speak in hushed tones as the van makes its way down road after road of dilapidated buildings and parks that used to be teaming with kids, but are now vacant, ugly reminders of the world that used to be.

The sounds of Jim Lampley screaming “Bang! Bang! Bang!” echo through the night.

We are the few surviving members of the Pacquiao Resistance Movement and things have not been going well for us at all.

*******************
A little while back, buried in the pre-Manny vs. Margarito promotional muck, some internet boxing writer coined the phrase, “The Movement to Discredit Manny Pacquiao” to refer to those critics who dared to question the modus operandi of internet boxing’s current cash cow.

Actually, the number of well-informed critics is growing…you just wouldn’t know it by the coverage on the major boxing sites.

Hell, two of the major boxing sites, AOL Boxing Fanhouse and Boxingscene, are almost entirely built around the world of Manny Pacquiao.

Prior to his latest contest, these two sites worked almost as co-promoters, alongside Top Rank, bringing the public every little detail about the Filipino sensation, his colorful team, and the celebrities who chose to wish him well.

At one point, twelve of the top fourteen “news” stories featured on Fanhouse were Pacquiao-related.

Other sites, to varying degrees,  jumped on the bandwagon, with Max Boxing’s Steve Kim even choosing to tailgate in the Cowboy’s Stadium parking lot prior to the bout. And let’s not even mention the folks over at Examiner.com, who figuratively (or literally) pinch their nipples and stain their keyboards at the prospect of a Pacquiao fight.

With a solid, single-minded fan base of 10-20 million rabid fans scouring the internet for Pacquiao-related articles, every website with an eye towards upward mobility has scrambled to find a way to beef up their stats with articles aimed at claiming a chunk of that traffic.

Writers grasp at these numbers to boost their own status and administrators fall all over themselves to bring in the page views that will allow them to compete with their competitors and boost their own ad revenue.

Of course, nobody in the industry will admit this blatant pandering. Many, honestly, don’t even see it. They’ll argue that Pacquiao is a legit news story and boxing’s biggest star at the moment. And that, in and of itself, may be a valid point. But the real problem isn’t with the coverage; It’s with the editorial decisions that accompany that coverage.

The same hard-edged boxing experts who rode Oscar de la Hoya, Floyd Mayweather, and any number of stars in the past, have suddenly become unable and/or unwilling to place Pacquiao under that same scrutiny.

Pacquiao’s last five opponents, and 10 of his last 14, have come into their contests following career- threatening/career-defining losses.

The losses, alone, aren’t the factor. Fighters lose all the time and manage to come back and have successful careers afterward. But veteran offensive specialists who suffer crushing KOs at the tail end of a long career are like toothless and de-clawed tigers. They seldom rebound and tend to fall apart very quickly after their public executions.

People who know the sport know that; Team Pacquiao  knows that.

There is just something very cynical about zig-zagging through 4 weight classes, fighting the loser’s bracket while still insisting on weight stipulations.

Also cynical is the alleged experts who somehow fail to recognize or acknowledge that the only similarities fighters like Cotto and Margarito had with their previous, pre-Manny, selves is through name alone.

The fact of the matter is that Team Pacquiao has carefully maneuvered Manny all around the boxing landscape, picking off the lame ducks one by one as his fame grew via these same media outlets who so desperately grab at the massive traffic coming in from Asia and via Filipino-Americans in the US.

Max Kellerman bravely hinted at Team Pacquiao’s careful matchmaking during the Pacquiao-Margarito PPV. Of course, this was drowned out by the overboard cheerleading of Jim Lampley and just the general atmosphere of HBO, which is clearly and unabashedly in the Pacquiao business. (To his credit, Lampley would publicly acknowledge the business relationship between his own production company and Freddie Roach during the telecast).

The entire boxing media has been turned on its ears by the Pacquiao phenomena. Reality has not so much been bent or re-shaped, but completely swept under the carpet in favor of the short-term influx of traffic searching for Manny Pacquiao, the celebrity/cultural icon.

Plain and simple…positive coverage draws traffic and gets sites bookmarked. Whether they realize what they’re doing or not, the boxing media is pandering to a group that may or may not even convert to regular visitors once Pacquiao is no longer  fighting.

Some have claimed that writers set out to attack Pacquiao for similar reasons–to gain traffic and draw attention. Unfortunately for members of the “movement,” there is no equal and opposite reaction when it comes to all things Manny.

Generally speaking, the new influx of Pacquiao fans is not comprised of overly sophisticated fight fans. They don’t want to debate and they do not want to read negative or critical stories about their icon. Sites and writers who don’t give them what they want might get a short-term bump in traffic, but eventually find themselves black listed and forgotten. There is no long-term boost in viewership for those who dare to put Manny under the same scrutiny as any other fighter. You simply get left in the dust by those who are willing to suspend disbelief in favor of  commercial considerations.

Anything but glowing praise gets you billed as the dreaded “hater” and to less sophisticated fans, who see that so little of the scrutiny is brought up in the mainstream boxing media, any criticism appears to be some out-of-the-blue ambush without any shred of real substance.

Actually, the movement to discredit Pacquiao is no move to discredit him at all. Those that put Manny under scrutiny don’t deny that he’s a talented fighter and don’t even deny that he’s faced an overall solid level of competition, even in recent years. Some just feel uneasy about the kid gloves used to handle Pacquiao. Some are worried about the cozy relationship between one promoter’s cash cow and a media that seems more than willing to help him co-promote his investment.

If there’s any sort of  movement at all, it’s among free-thinking, independent boxing writers who merely want to establish some sort of even-handed standard in the media …a push to hold Pacquiao under the same microscope used to examine those fighters without 10-20 million fresh IP addresses to add to website stats.
******************

The van has stopped and we sit in frozen silence for an eternity before somebody finally rips the back door open and the stinging light of morning shoots in.

“Come on!” A voice half-whispers, half-shouts from behind the light.

We’re rushed into another dark and abandoned house, still squinting from the light and trying not to fall over ourselves as we’re quickly led through a hallway, down a flight of stairs, and into another dark room containing two stained and musty mattresses.

Two paper bags are thrown at us as we make ourselves comfortable. Each has a ham sandwich, an apple, a box of raisins and a bottle of Sunny D.

Everything is so damn delicious. Maybe its the hunger or the thirst; Maybe it’s knowing that we likely have at least a couple more days to relax before being ratted out and forced to move.

In any case, we’re still chewing and savoring the meal when we begin speaking of Pacquiao and the movement to restore sanity to our world.

Plans are formulated, details are shared.

Inside, we huddle and speak of times before the great take-over and go over plans for life after our victory. Life is not ideal, but, at the moment, it’s not that bad.