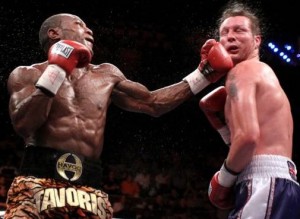 We’ve all heard the old philosophical riddle about a tree falling in the forest with nobody around to hear it. On Friday night, we might find the answer to a similar question: If Tavoris Cloud defends his title against a no-hoper in an non-televised fight, does anybody care?

On Friday night, Tavoris Cloud will defend his light heavyweight title in Miami. You could be forgiven for needing to be told that Cloud (21-0-0, 18 KO) is no longer just a promising prospect and, in fact, holds a major title. Other than a close win over division stalwart Glenn Johnson on an HBO undercard in August, Cloud’s exposure on television has been somewhat limited.

It is a bit difficult to tell why; the hard-hitting Cloud was entertaining in his previous two victories on ESPN’s Friday Night Fights. In August 2008 he became the first man to stop granite-chinned veteran Julio Cesar Gonzalez, who had gone the distance with Zsolt Erdei and Roy Jones and defeated Dariusz Michalczewski, in a title eliminator. Cloud didn’t fight again for over a year and the long layoff slowed his momentum.

When he did return in 2009, he won the IBF title in a decision over another veteran fighter, Clinton Woods. Unfortunately, what came next were more setbacks. Cloud dropped out of a scheduled fight against Johnson earlier this year with an injury. Many speculated that a promotional dispute also played a large role in this decision. Promoter Lou Dibella accused Don King of “stealing” Cloud, while King claimed he simply made a legitimate offer to a free agent fighter.

The fight was eventually rescheduled and Cloud defended his title against the veteran Glenn Johnson. After the fight, Cloud seemed to be a fighter on the rise; however, his next challenge seems like a step backwards. Cloud’s defense on the 17th comes against the undeserving Fulgencio Zuniga on the undercard of the Odlanier Solis-Ray Austin heavyweight title eliminator.

As much of a slap in the face as it is for a champion to fight on the undercard of a fairly pointless “who gets first chance to be beaten up by a Klitschko” contest, that the fight won’t be televised [on a major network] leads one to wonder why the fight was scheduled at all.

Zuniga (24-4-1, 21 KO) has been knocked out when he has stepped up to elite competition against Lucian Bute and Kelly Pavlik; if Cloud fails to do the same, it will be a major disappointment.

Against this type of competition, Cloud needs to win impressively and hopefully he can win over some fans in his home state of Florida. This could set the stage for a potentially big match against the winner of the Bernard Hopkins-Jean Pascal fight or perhaps a fight next spring against former lineal champ Chad Dawson.