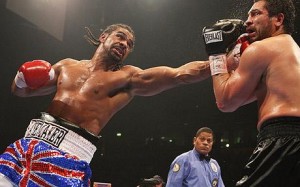 David Haye entered 2010 having snatched the WBA Heavyweight title away from ‘Giant’ Champion Nikolai Valuev in Nuremberg, Germany on a close, deserved, 12 round decision at the end of 2009. As per usual, not every fan was happy and I doubt they will be until ‘The Hayemaker’ finally steps through the ropes with the widely regarded ‘real’ Heavyweight Champions, the brothers from the Ukraine – Wladimir and Vitali Klitschko.

So, did 2010 bring us the much anticipated clash?, Well disappointingly, no. Haye had the matter of a mandatory defence against veteran former Champion, John Ruiz to overcome in April. The M.E.N in Manchester was the venue and now seems to be Haye’s favoured venue in the UK. A full house in Manchester got to see Ruiz down early in the 1st and again in the 5th and 6th with Ruiz finally stopped on his feet in the 9th. It was an entertaining fight that left the crowd and viewers happy, though not the fighter and his trainer Adam Booth – they won the fight but a cut in training, in the build up, had meant a lack of sparring, so Haye’s reflexes were not as highly tuned as normal. Ruiz was a nice test at Heavyweight though should never have been No.1 contender, had been pretty inactive in recent years and was on the decline. Still, that was the WBA No.1 ‘out of the way’, Now time for the Klitschkos. – Right?…..Wrong!

It would be another seven months before Haye stepped through the ropes again and negotiations with the Klitschko’s once again stalled, with both parties blaming the other, while the fans once again missed out on the only Heavyweight fight that matters in this dire division.

What the fans got treated/subjected to was Audley Harrison, a man who hadn’t beaten a Top 10 contender in his life and had lost to Dominick Guinn, Martin Rogan, and Michael Sprott to name a few. A rematch win over Michael Sprott and bagging the Vacant European Heavyweight title somehow elevated Harrison into the WBA rankings, despite the fact that neither man deserved to be fighting for a European belt anyway!

The Haye vs Harrison clash was a ’double edged sword’, as it got plenty of media and tabloid coverage, and did well at the box office, dragging the casual fan into watching boxing. The downside is that as most astute boxing fans were aware, the fight was a complete mismatch and Harrison’s non effort and fear of getting hit backed up the opinions of many.

Haye and Harrison fought at the MEN in Manchester in November, but fought is the wrong word as they moved around the ring for the first two rounds without hardly throwing a punch, the referee even warned them to start throwing punches! When the end came in the 3rd, it was quick and brutal with Haye battering Audley to the canvas. Harrison got to his feet, but the following barrage of shots forced the intervention of the referee. Haye finished the job well but one sensed he could have done that in the 1st round.

So two defences in the bag for Haye and Harrison was at least a good payday. But for someone of David Haye’s undoubted skill and ability, it was a disappointing year from a fans perspective, and I am a fan.

So what will 2011 bring?, Well, Haye has stated he will be retired by October (before reaching his 31st birthday) and that’s his prerogative. He’s a two-weight World Champion having won titles at Cruiserweight and Heavyweight. His mandatory is Ruslan Chagaev for sometime before April, but the WBA has already stated that they will not force that fight if Chagaev doesn’t pass medical tests in the UK (if Haye’s camp win the ’purse bids’). Chagaev has not looked the same fighter that he was when he won the WBA title over 3 years ago. I believe it’s a formality win for Haye.

The boxing ‘World’ wants to see Haye face off against at least one of the Klitschko brothers and Golden Boy Promotions are pushing for the fight to be made in Las Vegas. I wish GBP all the will and luck in the World getting both sides to come to an agreement, and while I suspect a fight will happen, I won’t hold my breath.