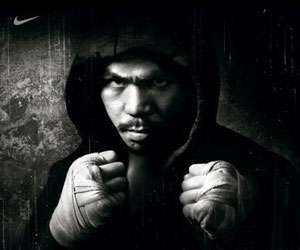 After some speculation regarding Manny Pacquiao’s next opponent, promoter Bob Arum made things official by announcing that his fighter will be taking on Shane Mosley at the MGM Grand in Las Vegas on May 7th.

Mosley is coming off back to back less-than-stellar performances in his last two outings: a one-sided unanimous decision loss to Floyd Mayweather and a duller than dull draw to defense-minded Sergio Mora.

Fans have been voicing their disapproval about the prospect of a Pacquiao-Mosley clash ever since the buzz started following Pacquiao’s November fight. Citing a concern that Mosley is well over the hill and bordering on shot, many have expressed their desire to see Pacquiao in the ring with someone younger and potentially more dangerous, but Arum went with the easier-to-promote Mosley over lesser-known challengers and two-time Pacquiao foe, Juan Manuel Marquez, who reportedly wanted a bigger slice of the pay per view pie.

The 39-year old Mosley will be making a guaranteed $5 million, plus a cut of the PPV action. There’s no word yet on Pacquiao’s take.