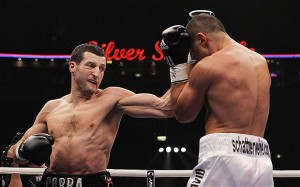 Perhaps the single biggest lesson we were given in 2010 is that Bernard Hopkins will never age. He will never retire, in fact he will never die. But he will always be a Champion.

The fact that Lucien Bute has signed to fight Brian Magee confirms Showtime were right to not invite him to the Super Six, even after three people dropped out. The competition is simply too tough for Bute.

Michael Katsidis deserves to be on TV every time he fights. So does Brandon Rios for that matter.

HBO will ignore what fights the fans want in favour of what makes money. Well, we already knew this but they confirmed it again this year.

Bob Arum doesn’t give two shits what the fans think, neither does Oscar.

Juan Manuel Marquez could quite possibly be the greatest combination puncher that has ever graced the square circle.

Amir Khan has a chin. Fact.

Timothy Bradley is as old school as you can get. He will fight anyone, anywhere, anytime.

Alexander Povetkin is the best in the world at ruining a promising career so quickly.

Evander Holyfield is still delusional, so is RJJ for that matter.

GBP still has no idea how to guide a prospect to world title level.

Amir Khan will defeat the Bradley/Alexander winner, then defeat JMM and Floyd Mayweather in consecutive fights. People will still question his chin.

Carl Froch will win the Super Six, people will still rate Calzaghe over him.

David Haye will finally fight a Klitschko, unfortunately it will be Mamma Klitschko, who will destroy him in a round. Haye will blame the referee.

Chad Dawson will continue to be on the missing persons list. No one will care.

Humberto Soto will still not gain credit for his wonderful and all action career.

Victor Ortiz will be on HBO every damn chance they get.

Andre Berto will continue to be ducked by everyone.

Audley Harrison will declare it is his destiny to win the world heavyweight title. He will lose to some unknown journeyman.

Pacquiao will not fight anyone who isn’t a free agent or signed to Top Rank. The fanbois will lap it up.