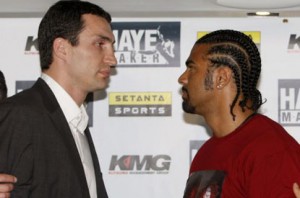 Where there was once a pretense of structure and narrative, the goings-on in boxing have proven to be so out of control in recent years that not even 8-figure paydays are enough to move the mass of chaos and ego.

Make no mistake about it, the inmates have full control of the asylum.

Case in point is the Klitschko-Haye drama.

The only big fight to be made at heavyweight has once again bitten the dust with more time dedicated to pointing fingers than throwing punches.

More than a few people thought David Haye to be the savior of a lackluster heavyweight division when he burst upon the scene and, in an Ali-Liston moment, confronted the reigning WBO/IBF champ, Wladimir Klitschko in search of a fight.

The fight was signed, but a bad back or bad financial deal, depending who you ask, forced Haye out.

Then, the fight was on again with both sides eventually finding the exit door over the revenue split.

This time, with the scheduled Klitschko-Dereck Chisora fight falling apart due to a Klitschko injury and with Haye having nothing but public appearances on the horizon, there was hope that boxing’s second biggest bout could finally get made.

With Team Haye apparently conceding a 50-50 split on revenue, the excuse for the end of talks was cited as “scheduling conflicts.” Haye balked at the proposed April 30th SKY TV pay per view date being too close to Amir Khan’s April 16th date; Klitschko cited the lack of a venue for any other day than the original proposed date.

Then came someone calling someone else a coward, Dereck Chisora gets brought back into the picture, fans gripe, the media take sides…and it’s just another cluster fuck for the Super Sized version of Pacquiao-Mayweather.

But who’s to blame, really?

In this case, it’s not the promoters or media or even the fighters who deserve the Andrew Golota nut combo– It’s the sport of boxing itself– And I use the term “sport” loosely because, as time goes by, boxing is looking less and less like an actual sport and more like a focus group-driven series of random exhibitions.

The fact that the sanctioning bodies have become more and more marginalized is a good thing, but in the absence of any real, viable substitute, the vacuum created is sucking the life from the sport.

Boxing, for it’s long term health, needs to have some structure restored, it needs to have a logical narrative where point A leads to point B and then point C. It can’t count on fans to just recognize the significance of a fight based on name and reputation alone because, with the diminishing exposure, those who actually know the fighters will eventually die off. And, really, the big fights aren’t always the best fights or the fights the sport needs most.

There is no real authority in boxing at the moment and it shows in the way fights are getting caught up in petty bickering and how stipulations and conditions, above and beyond the scope of the sport, are being wedged into contracts.

With no real, reasonable governing body, money and politics call all the shots and a real sport can simply not survive with this sort of random moral code.

Imagine any other sport governing itself that way boxing does.

Just picture the outrage if The Yankees decided that they were only going to play The Dodgers, The Mets, and The Cubs from now on…with FOX actually helping broker the deal for them! What if the Patriots and the Eagles (or whoever) couldn’t come to terms on a Super Bowl deal and now, it was off…or better yet, both would be playing different opponents for a share of the Super Bowl title?

Mainstream sports fans would be outraged and each sport’s respective sanctioning organization, fearing repercussions from the fans, would be moved to action.

Yet, in boxing, this behavior is par for the course and, as a result, fights are getting harder to make. With fighters and their teams of advisers, managers, promoters, and publicists in full control, the narrative of the sport has been reduced to all business. And, while business matters have always been a part of boxing, fans could always count on someone, somewhere exercising some common sense and flexing some muscle in order to get the ball rolling.

Nowadays, both sides just dig in, work the media to get their side across, and move on to easier fights with guys who are just eager to make a living wage.

With everybody calling their own shots, HBO acting as a de facto sanctioning body, and Ring magazine issuing belts that often serve as a pretext for name fighters to pass over lesser-known contenders, the narrative just keeps getting murkier and murkier.

At this point, it’s a cliche to call for a real, legitimate governing body that conducts itself professionally, but the lack of anything even resembling a proper authority is resulting in utter chaos.

A fair and truly independent rankings would go a long way towards restoring some order, but who could be trusted with the task? Ring Magazine has the money and the name recognition, but being owned by Golden Boy and rather vague in their ranking procedure, disqualifies them from true credibility. Other media sources are also littered with conflicts of interest.

And sadly, even if a solid rankings protocol could be established, who would enforce it? Who would report on it…and how many fans would forget about it when blasted with hundreds of thousands of dollars in promotion?

It’s quite amazing that any good fights get made at all and, as the fan base gets further isolated and the natural order of the sport gets further compromised, boxing’s return to the mainstream sports world seems more and more unlikely.

The solution to many of boxing’s problems is actually quite simple– just conduct itself with the same care and professionalism as other sports. Unfortunately, “care” and “professionalism” are terms that just don’t go hand in hand with the world of boxing.