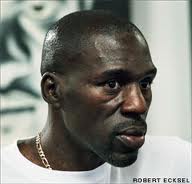 The Las Vegas Review Journal is reporting that Roger Mayweather, former world champion and current trainer of nephew, Floyd Mayweather jr., has struck a plea deal with prosecutors on two felony battery counts just four days before he was due to go to trial.

Mayweather was charged with striking and choking former female trainee, Melissa St. Vil in August of 2009.

According to the plea deal, Mayweather will be put on informal probation, pay a $1,000 fine, attend domestic violence counseling and perform 50 hours of community service.