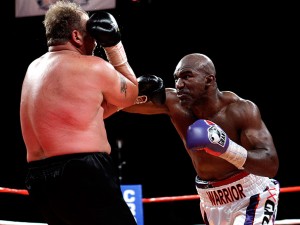 This Saturday night, future hall of famer, Evander Holyfield will step into the ring for the 56th time.  Holyfield (43-10-2, 28 KOs) is 48 years old, and probably at least 10 years past his prime.  Because of his age and diminished skills, most members of the boxing media (not to mention most fans) seem to be greeting his latest comeback with rolled eyes and groans, if not gasps of horror.  Their concern is understandable, as it saddens us to see our heroes reduced to fighting for chump change in backwater arenas, and downright sickens us to see the results of brain injuries on pugilists who have hung on too long.

Despite the obvious risks he is taking with his health however, I must admit I can think of many people I’d rather give my pity than Evander Holyfield.

We are talking about a man who has proven doubters wrong on so many occasions that it’s getting tough to count them on both hands.  Flash back to 1988, when Holyfield had just defeated his last cruiserweight opponent and decided to make the jump to heavyweight.  You were not alone if you thought he was too small to have a lasting impact in the division.  When he won the unified titles from Buster Douglas, it was because Douglas was a “lucky” fighter who was fortunate to have the belts in the first place.  When he beat George Foreman and Larry Holmes, they were old men (though neither as old as Holyfield is now) well past their primes.  Surely after his loss to Riddick Bowe his career was nearing an end.  Then he beat Bowe in a rematch.  After being stopped in the rubber match, concerns about his health again raised calls for his retirement.  This was 14 years and 20 fights ago.

What came next may have been Holyfield’s greatest achievement in the ring.  As much as an 18 to 1 underdog, Holyfield completely dominated “the baddest man on the planet” Mike Tyson.  To prove it was no fluke, he repeated the feat seven months later.

Surely though, Tyson was finished, and Holyfield wouldn’t still be able to compete with younger heavyweights.  In his next fight, he won a rematch with Michael Moorer, five years his junior, to again hold unified heavyweight belts.  Moorer, by the way, retired two years ago, at 41.

Then it seemed Holyfield’s career was finally hitting a wall.  From 1999-2004 he won only 2 fights.  This period of his career ended with consecutive losses to Chris Byrd, James Toney and Larry Donald.  At this point he hung it up temporarily as he was stripped of his New York State boxing license for diminished skills, despite passing all medical tests.

After a couple years off Holyfield was back, now competing in Texas, with four wins in four fights in 2006 and 2007.  This earned him his last two title shots, one of which (against Nikolay Valuev at age 46) he very nearly won.

Now, seemingly out of chances, Holyfield continues on fighting for low stakes at small venues.  Despite general belief that he has long since lost most of his ability, he is widely favored to defeat journeyman Sherman “Tank” Williams (34-11-2, 19 KOs) this weekend.  He remains confident in his ability to once again be a heavyweight champion, regardless of how faint his hopes may seem to the rest of us.

My question to those in the boxing world imploring Holyfield to quit however is why should he listen?  When his own self-belief and determination have silenced critics so many times before, can you really fault the man for believing he has one more great fight in him?

If you don’t’ want to see Holyfield continue boxing, by all means, don’t watch.  Give the man his due respect though, and try to see where he is coming from.  Boxing is what he loves, and it is the best way he knows how to make a living.  He knows the risk he is taking, and if he can live with it, so can I.