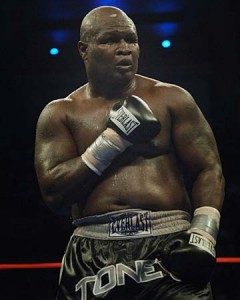 Former middleweight, super middleweight, cruiserweight world champion, and current fringe heavyweight contender, James “Lights Out” Toney (72-6-3, 44 KOs), will be back in a boxing ring, February 24th at the San Manuel Indian Bingo & Casino in San Bernadino, California after a failed attempt to enter the world of mixed martial arts.

The veteran boxer was forced to submit in one round vs. MMA veteran, Randy Couture, at UFC 118 in August of last last year. His last bout in a boxing ring was in September of 2009 when he knocked out journeyman, Matthew Greer, in two rounds.

Toney will be taking on journeyman, Damon Reed (45-14, 32 KOs), who has been knocked out in three of his last five contests, most recently suffering a sixth round KO loss to Hasim Rahman in August of last year.