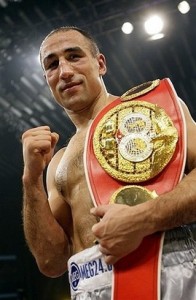 With a tough bout against Andre Ward in the World Boxing Classic semi-finals waiting for him later in the Spring, former world middleweight champion, Arthur Abraham (31-2, 25 KOs), is looking to get some momentum going with a tune-up bout against Croatia’s Stjepan Bozic (24-4, 15 KOs).

Following a one-sided loss to Carl Froch in November and a DQ loss to Andre Dirrell in March of last year, Abraham will seek to get back in the win column against a tailor-made opponent in his native Germany.

Bozic has only fought twice in over two years, with one of those being a TKO 6 loss to Dimitri Sartison in 2009.