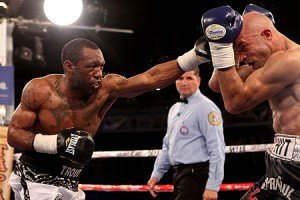 Guadalajara, Jalisco, Mexico– Austin Trout (22-0, 13 KOs), in a competent, professional effort, controlled his jr. middleweight contest with Rigoberto Alvarez (26-3, 19 KOs) and came away with a one-sided unanimous decision for a WBA 154 lb. belt.

Alvarez, fighting in his hometown, never managed to get by a basic jab from his fellow southpaw opponent, and was hearing boos and derisive whistles from the middle of the contest to the final bell.

Trout, cruising to an easy win, never had to shift into second gear and dominated the contest with basic movement and a solid jab. In the final thirty seconds of the bout, Trout put on the heat and almost convinced the ref to stop the contest, but the final bell saved Alvarez from the stoppage.

The judges’ scorecards reflected the one-sided nature of the contest with scores of 119-108 all around. The Boxing Tribune also scored the contest 119-108.

The Boxing Tribune Story Behind the Story: Billed as a “world” title fight by the WBA, this was little more than a fight between two mid-level contenders as Miguel Cotto is the legit and recognized WBA jr. middleweight champ.

Belt madness notwithstanding, Trout looked mature and disciplined, but Alvarez’s lack of aggression really didn’t force Trout to step up and prove whether he can hang with the top fighters in the division. The questions still remain whether Trout can take a punch and whether he has the overall skill set to be a star.

On the televised undercard, Mexico’s Jesus Silvestre (20-2, 16 KOs) stopped Nicaraguan, Yader Escobar (23-5, 15 KOs), in the third round of a WBA minimumweight title eliminator.

Overall, Silvestre looked sharper than his opponent and proved it by dropping Escobar with a perfectly placed liver shot in the third round. Escobar managed to get back to his feet, only to be knocked out cold with a strong left hook from “Negrito” Silvestre.

The Boxing Tribune’s Story Behind the Story: Not to pick on the WBA, but how did Escobar get put into a title eliminator when he’s coming directly off a loss last year? Silliness like this really does take away from an otherwise good performance by Silvestre.