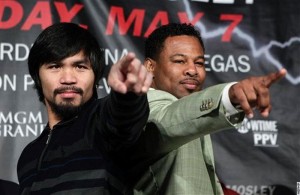 From city to city, reporter to reporter and even amidst a trip to the White House, Manny Pacquiao is currently engaged in perhaps the toughest battle of his storied 15+ year career. The Filipino icon has the tough task of actually convincing the boxing public that Shane Mosley represents the best available opponent for a high profile pay per view contest.

Throughout the media tour thus far, Pacquiao has had to run through Bob Arum’s talking points because, frankly, nobody’s buying it and not even Arum, a genius at twisting public perception, can sell Shane Mosley to the cynical masses.

Pacquiao has been working the angle of Mosley being a slick, fast, African-American, playing off the accusation leveled by Bernard Hopkins (among many) that Manny has never faced that particular type of fighter and, maybe, has been purposely avoiding those fighters.

Unfortunately, Mosley may be African-American, but he is not fast, nor slick, nor does he represent the type of fighter that Manny has been accused of avoiding. Especially not now, at 39-years of age and after a long career of fighting some of the very best in their primes. The affable three-division world champ from Pomona, California, whether he admits it or not, is nowhere close to the athlete who was once considered a worthy prospect to carry the legendary “Sugar” nickname.

And, while there’s only so much you can say to sell yet another bout against yet another veteran fighter coming off a one-sided, decisive loss, much of the criticism has already melted away.

Consider it a testament to Pacquiao’s charm or to the boxing media’s infinite ability to be bought off and/or lured away from the truth with slight of hand and the promise of a pay day.

Whatever the case, the boxing media’s outrage lasted approximately five minutes of one press conference and now all we get is silly softball questions lobbed at Pacquiao and crew as if those asking the questions were actually working on the management team of the reigning WBO welterweight champion.

And that’s the way life has been for Manny Pacquiao, ever since moving up to 135 lbs. and separating pedestrian David Diaz from his lightweight title back in 2008.

Whether fans acknowledge it or not, Manny has been Teflon Manny, untouchable by the usual scrutiny given to fighters who rise to the top of the sport.

Because of his “aw shucks” demeanor and the monstrous wave of popularity and, consequently, money that he brings with him, the media has given him a free pass and plenty of elbow room in terms of having to explain his actions in the ring and in the area of opponent selection.

Case in point is the very fact that all of Manny’s post-130 lbs. opposition (and many prior to that) have come into their bouts as legitimately damaged goods. Yet, not a peep from the usually-cynical media, who know the difference between a prime killer and a toothless tiger and are quick to mention it when it comes to any other fighter, but Pacquiao.

In the case of Shane Mosley, this writer has already gone on record as saying that the Mosley bout represents Pacquiao’s toughest contest since Juan Manuel Marquez. While Mosley may be physically done as a fighter, he is leaps and bounds more intelligent and versatile than well-known lunk heads like Margarito, Cotto, Clottey, and Hatton.

The key here, though, is not that Mosley is the best available opposition, just that he’s the best of the lot that Pacquiao has chosen to face.

But Manny gets away with the, “I just do my job, my promoter chooses my opponent” line and the media, who would be mad with condescending rage if Mayweather, Hopkins, or anyone else delivered such a line, six fights in a row, eats it up like KFC mashed potatoes.

Surely, if anyone can sell Shane Mosley as a viable opponent for a major world title fight, it’s Teflon Manny.

The shame is that we may never see one of the sports greatest talents matched up against someone who could actually affirm that greatness.