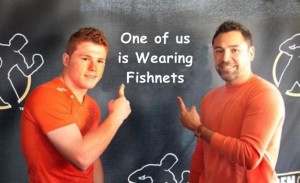 Surprisingly, this article by Bill Dwyre does not focus on the current wave of corruption that is souring what is otherwise a pretty decent match-up tonight between the young Alvarez and the tough Matthew Hatton. Instead, the article is a fluff piece about how Oscar De La Hoya hopes to mentor the tough Mexican through his career and keep him on the straight and narrow–something that De La Hoya regrets not doing when he was young.

This is all well and good, but the real meat of the story was De La Hoya’s Golden Boy Promotions pushing the ever-corruptible WBC to sanction the bout as a Jr. Middleweight Title Bout, something that boxing dictator Jose Sulaiman agreed to quickly while his eyeballs transformed into cartoonish dollar signs and a comical cash register sound effect played.

Oh, and this Jr. Middleweight bout is at a catchweight of 150 pounds.

Not that any of us are surprised as this has been business as usual for boxing over the last few years (the WBC even creating a “Diamond Belt” for catchweight bouts that are certain to rake in piles of cash) but it hardly seems like the “straight and narrow” path that the article touts. Canelo may be the next big thing, but frankly, it’s sad that his first title shot will come with an asterisk and a whole list of stipulations, and to hardcore fight fans, an otherwise solid bout for a prospect becomes another corrupt WBC farce.

So Saul Alvarez can live on the straight and narrow all he likes, and De La Hoya can keep him on the path to stardom, but don’t be fooled into thinking that there aren’t shadier deals being made in smoke filled back rooms to fluff up the money making potential of a young fighter. Where Sulaiman is involved, this is the only thing we can be sure of.

GAMING NEWS! EA Sports’ Fight Night Champion hit store shelves last Tuesday and this author hasn’t bought it yet. Reviews have been solid with the addition of a story mode and an M rating. Finally, a Fight Night game that isn’t afraid to let a fighter get busted up. For unpaid writers like myself, the Demo is available online and allows one to fight three rounds and get a feeling for the new controls. Yesterday was payday, so expect a full review next week after I throw my controller through the television.

HOME ENTERTAINMENT! I have gotten a sneak peek at the DVD and BLU-RAY releases of The Fighter, and they are looking good. The picture quality is top notch and the discs have a decent amount of extras including some behind-the-scenes featurettes and a commentary by director David O. Russell. Loyal readers will remember that way back in February of last year I called Christian Bale’s performance Oscar worthy… did I call that or what? Unfortunately for the film itself, the problems I had with the story before still stand today with the finished product.

These issues may be resolved if there’s any truth to what Mark Wahlberg said in this EXTRA interview hinting at The Fighter 2: Electric Boogaloo or 2 The 2 Fighter or The Fighter 2 The Streets being in mental pre-production. Hopefully there’s nothing behind the idea of having AC Slater play Arturo Gatti.

That’s it for now.