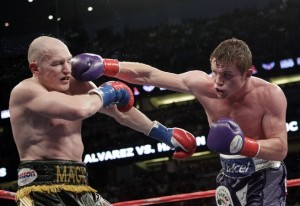 Honda Center, Anaheim, California– Despite the negativity attached to the exterior of the event via bogus title designations and catchweight nonsense, the in-ring contest between 20-year old Saul “Canelo” Alvarez (36-0-1, 26 KOs) and Matthew Hatton (41-5-2, 16 KOs) turned out to be a solid, entertaining affair for viewers of HBO’s Boxing After Dark.

Clearly the stronger, heavier-handed fighter, Alvarez stalked Hatton for much of the fight, landing some crisp combinations and thudding body shots along the way. Hatton tried to work the angles and box his young opponent, adding in occasional bursts of offense, but he was generally too slow and possessed too little punching power to bother Alvarez.

In the middle of the contest, possibly in an attempt to throw Alvarez off his game, Hatton started doing some roughhousing. The end result was a lost point for Alvarez in the seventh for hitting on a break.

In the end, though, Alvarez was too much and coasted to a fairly easy win with scores of 119-108 all around. The Boxing Tribune also scored the contest 119-108 in favor of Alvarez.

Broner failed to impress with a defense-minded attitude, weak jabs, and slapping counters against Ponce de Leon, who carried large chunks of the fight with his activity and aggression. However, the judges’ scorecards were unanimous: 96-94, 96-94, and an obscene 99-91 by judge Tony Crebs– all in favor of Broner. The Boxing Tribune scored the fight 96-94 in favor of Ponce de Leon.

In a flash, Zab Judah found himself pressed up against the ropes in tears.

His father, Yoel, and his childhood idol, Pernell “Sweet Pea” Whitaker, came over to relay the congratulations seconds after it had happened, smothering him just a few feet away from where he’d just stolen the fight.

Standing in the opposite corner, Kaizer Mabuza slumped over, stunned. At that moment, he was a fighter who’d just spent six rounds roping in the momentum from his heavily favored opponent before it was taken right back after a few critical mistakes.

With 1:57 remaining in the seventh round, Judah buckled Mabuza with a straight left, sending him spilling through the ropes. Once the referee finished his count, Judah went in for the kill, unleashing a furious series of left and right hooks until the official handed him the knockout victory here at the AmeriHealth Pavilion attached to the Prudential Center in Newark tonight.