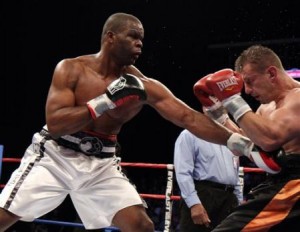 Former heavyweight title challenger, Michael Grant (46-4, 34 KOs), is moving ahead with his comeback this Friday against the 6 ft 8 Tye Fields (45-2, 41 KOs). After taking nearly two years off between 2008 and 2010, the 6 ft 7 Grant made his comeback in May of 2010 against club fighter, Kevin Burnett and now will be entering the ring for the third time in ten months against Fields at the Planet Hollywood Resort and Casino in Las Vegas, Nevada.

In his last contest, Grant performed well and had several impressive moments against Top 10 ranked Tomasz Adamek before ultimately dropping a unanimous 12-round decision.

Fields, perhaps best known for his first round KO loss to Monte Barrett in 2008, is 4-0 against club-level opposition since the Barrett loss. Fields holds a KO 2 win over Bruce Seldon in 2005.