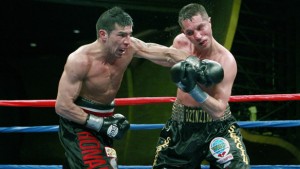 Too big, too athletic, and too talented. Sergio Martinez defended his middleweight title and his spot among the pound for pound best in the sport against a tough and game Sergiy Dzinziruk.

Boxing from the outside with his hands down and working off rhythm, Martinez was able to decipher his opponent’s disciplined, controlled defense and began picking him apart with accurate shots.

Dzinziruk was still performing solidly, although clearly behind on the scorecards, when he was dropped in the fourth and fifth rounds.

After enjoying his best rounds in the sixth and seventh against an apparently tiring opponent, Martinez came back big in the eight with a perfectly-timed counter that dropped Dzinziruk again and put him in bad shape. Martinez pounced on his injured foe, dropping him once again, and then eventually forcing the ref to stop the fight as Dzinziruk was falling for a third time in the round.

The Boxing Tribune Story Behind the Story: Martinez turned a potential dud into an exciting fight, but it’s time to stop picking on the jr. middleweights (Three of his four fights at middleweight have come against converted 154-pounders) and fight a top 5 middleweight. The desire seems to be there for Martinez and the talent is obviously there, but the question is whether he can convince HBO and the available talent pool to play along. A fight with Dmitry Pirog would be a fan-friendly contest pitting, arguably, the two best middleweights against one another, but neither HBO nor Pirog, himself, seem too eager.

Seemingly on a collision course with a career-halting defeat, Ireland’s Andy Lee managed to drop an exhausted McEwan in the ninth and stop him in the tenth.

Before that, though, Lee was being outboxed and had been buzzed several times in the contest by Scotland’s McEwan. Surprisingly, it was learned after the bout that the judges had the fight even going into the last round, so Lee still would’ve gotten the decision with ending the fight.

The Boxing Tribune Story Behind the Story: If this was some sort of elimination bout for a shot at Sergio Martinez, forget about it. Lee, at this point, would still be merely an opponent for any of the top middleweights.

Miguel Cotto did what most thought he would do by outclassing the crude, rock-throwing Ricardo Mayorga , eventually stopping the Nicaraguan wild man with a monster left hook in the twelfth with the aid of an apparent left hand injury suffered by Mayorga.

To his credit, Mayorga was aggressive throughout the contest despite being picked apart with an outstanding array of jabs and well-timed hooks from the defending WBA jr. middleweight champ.

Cotto never really felt the pressure as he was able to move in and out at will and was, for the most part, able to avoid every big shot thrown by Mayorga.

The end came in the last round when Mayorga apparently suffered a left hand injury in the same exchange that would see him dropped by a brutal Cotto left hook. Mayorga managed to get up, but seconds later, with his back against the corner, waved the fight off himself.

After the bout, Cotto indicated that he would be willing to fight Antonio Margarito once again while Mayorga officially announced his retirement.

The Boxing Tribune Story Behind the Story: Cotto looked very sharp, but was never really put into a stressful or precarious situation. So, until then, the jury is still out on whether he’s fully recovered from his two brutal losses to Margarito and Manny Pacquiao. All signs point to Margarito-Cotto II, so we’ll soon see if Cotto got his swagger back.

This contest was all Wolak as Foreman wasn’t moving and wasn’t strong enough to keep the Polish pressure fighter honest.

Winning every round up until Foreman refused to come out for the seventh round, Wolak set the pace by crowding his opponent and taking advantage of a curiously porous defense from the former world champ, Foreman.

The Boxing Tribune Story Behind the Story: Wolak wants Julio Cesar Chavez Jr., but he isn’t likely to get him at 154 anymore. And, after this performance, he still may not lure the second generation star into a bout. Despite this impressive performance and a couple of solid performances prior, Wolak is still firmly a second-tier fighter, but would make for an entertaining fight with any of the current champs.

IBF lightweight champ, Vazquez, was too mature and too disciplined to give Zappavigna a chance in this contest.

Constantly moving and showing angles, Vazquez kept his rival off-balance with a sharp jab all through the bout. Zappavigna was a step behind the entire night and only occasionally landed anything of note.

The Boxing Tribune Story Behind the Story: Is Miguel Vazquez ready for the top 2 or 3 lightweights in the world? That’s still an open-ended question at this point, but it’s clear that he’s well ahead of the second-tier 135-pounders. At 24, it would be wise for his people to bide their time since guys with the mindset and skills of Vazquez just get better with added experience.

Other Fights of Note–