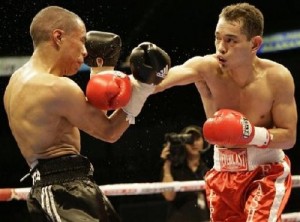 Golden Boy issued this in its press release today:

Golden Boy Promotions is extremely pleased to announce the signing of Two-Division World Champion Nonito Donaire to its roster of fighters. The 28-year-old native of the Philippines is coming off of a dominant second round stoppage of Fernando Montiel on February 19, which earned him the WBC and WBO Bantamweight World Titles. Now, as he looks to continue his reign as one of the top pound-for-pound boxers today, “The Filipino Flash” has signed an exclusive, multi-year agreement with Golden Boy Promotions.

“I’m honored to be joining so many great fighters and champions on the Golden Boy Promotions team,” said Donaire in the same announcement. “I’m going to fight my heart out every time I’m in the ring and will give fans the fights they want to see.”

However, Bob Arum of Top Rank, who has promoted Donaire for about three years, is not letting go so easy.

While Donaire claims that his promotional contract with Top Rank is void due to the company’s inability to fulfill one of the terms of the deal, guaranteeing at least three fights per year, Arum is claiming that the lack of fights was due to injuries on Donaire’s part and that their deal could actually extend to 2013.

With Donaire declaring promotional free agency and Arum claiming a binding contract until June 2012, at the very least, expect an extended legal battle that could put the 28-year old Filipino-American out of action for awhile.