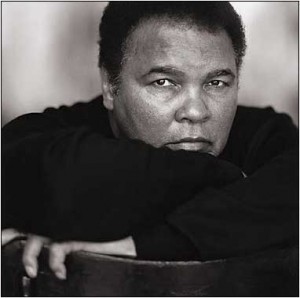 Boxing legend and the United States’ most well-known Muslim, Muhammad Ali, has made public his behind the scenes attempts to broker the release of US citizens, Josh Fattal and Shane Bauer, who have been held on espionage charges since 2009 when they were arrested hiking near the Iranian border. The third member of their group, Sarah Shourd, was released on bail in September.

Through the Iranian consulate, Ali has sent two letters to Iran’s spiritual leader, Ayatollah Ali Khamenei, pleading for the release of the hikers. Some believe the first correspondence influenced the release of the female member of the group.

“Please show the world the compassion I know you have in your heart,” Ali wrote. “Most Americans don’t know how warm and welcoming the Iranian people can be. One day, I hope I am able to return to Tehran to stand, greet and be among my Iranian brothers and sisters once again. Perhaps that day will come soon.”

Wife, Lonnie, also noted, from their Louisville home, that, if absolutely necessary, Ali would make the trip to Tehran if it would help the cause. but indicated that the visit would depend on her husband’s health.

Muhammad Ali is suffering from Parkinson’s Disease, a degenerative disorder of the central nervous system that has rendered the once gregarious and outspoken 3-time heavyweight champ relatively mute and expressionless.

Ali was made aware of the plight of the Americans after contacted by the late John Arum, the son of promoter Bob Arum, who also was a hiker. He has also met with the family of the imprisoned Americans.

No official statement or recognition of Ali’s plea has been made by the Iranian government thus far.