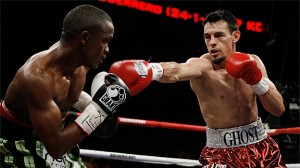 When 3-time World Champion Robert “The Ghost” Guerrero (28-1-1, 18 KO) steps through the ropes of the MGM Grand Arena in Las Vegas, Nevada, on Saturday April 9th, he will be staring into the battle-scarred face of Michael “The Great” Katsidis (27-3, 22 KO). Experts have already labeled the co-feature to the HBO Pay-Per-View card featuring Marcos Maidana versus Erik Morales, as the highlight of the night, and a potential Fight of the Year candidate.

Katsidis, a native of Toowoomba, Queensland, Australia, has a reputation for drawing his opponents into fierce fire fights, often shedding blood and fighting through cuts and swelling around his eyes. Katsidis’ unwavering will to win has carried him to victory over 27 of his 30 professional opponents.

In Robert Guerrero also lies the heart of a warrior – in and out of the ring. Since 2007, Guerrero has juggled the duties of a World Champion boxer with those of supportive husband, as his wife Casey battled leukemia. Guerrero’s performances in the ring gave him fan appeal, while his support for his wife made him something of a hero.

When Casey Guerrero was diagnosed with leukemia, Robert Guerrero decided to forge ahead with his promising career, while pledging his full support to her fight. Initially, his career stalled, as he fought only once in 2008; an impressive 8th round knockout victory over Jason Litzau in February. Guerrero remained inactive for the remainder of the year, and did not return until the early portion of 2009.

In March 2009, Guerrero was criticized for his effort against Daud Yordan. Guerrero looked flat over the first 5 minutes of the fight, and when an accidental clash of heads caused a cut over his right eye, he elected not to continue. The bout was ruled a no-contest.

Guerrero showed flashes of his impressive set of skills in his next two bouts in 2009. Guerrero’s best outing of the year came in August, when he outpointed South Africa’s Malcolm Klassen to take the IBF jr. lightweight title.

Guerrero would not defend his title. On February 16, 2010, he announced he was vacating his IBF jr. lightweight crown. A bone marrow transplant for Casey Guerrero would require even more time, attention, and support from a valiant Robert Guerrero.

“It is with great regret that I am relinquishing the junior lightweight championship of the world that I, along with my team, worked so hard to capture. I feel that it is in the best interest of the sport and the fans that I care so deeply for to give someone else a chance to fulfill their dream of becoming a World Champion. I am now focused on the love of my life, my wife Casey, as undoubtedly we face the greatest opponent of our life, cancer. Whatever the outcome, our faith in Jesus Christ will get us through. Thank you for the prayers and support. God bless,” Guerrero said in a statement released to the press.

Guerrero returned to the ring in April, campaigning in the lightweight division. He sandwiched a dominant 10-round decision victory over former lineal lightweight champion, Joel Casamayor, between wins over Roberto Arrieta and Vicente Escobedo.

While Guerrero dominated in his 3 outings in 2010, it was evident that he was not 100 percent in the ring. The underlying, and sometimes overshadowing story to the action was always Guerrero’s selfless sacrifice and the condition of his ailing wife.

Now that Casey Guerrero has been cancer-free for more than a year, Robert Guerrero has fully focused his time to his training, as he prepares for the toughest test of his 10-year career, the aforementioned Michael Katsidis.

Katsidis is a mere 3 months removed from a 9th round TKO loss to lightweight kingpin, Juan Manuel Marquez. Katsidis, who lost his older brother only 40 days prior to November 27, 2010, took the fight to Marquez until referee Kenny Bayless was forced to step in and call a halt to the bout in the ninth, as an exhausted and bloodied Katsidis absorbed flush blows from Marquez.

Guerrero has said he expects nothing but the best from Katsidis, who will have had time to deal with the loss of his brother and the emotional toll it took.

We should expect Guerrero and Katsidis to let fists fly in the ring this Saturday night. Given the track records of both, we should expect no less. Each fighter has been freed of the emotional weight on their hearts and minds, and each has a resume of harsh battles – in and out of the ring.

We can be certain that a focused, mentally and physically prime Guerrero will be ready for whatever comes his way on Saturday.