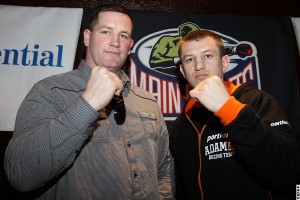 Polish heavyweight contender Tomasz Adamek (43-1, 28 KO) has had his sights set on a heavyweight title since October 18, 2009 – the day he officially vacated his IBF cruiserweight title to campaign as a heavyweight. After winning titles in the light heavyweight (WBC) and cruiserweight (IBF) divisions, Adamek said goodbye to his comfort zone, and moved up to the division where 6-and-a-half feet tall giants with steel nerves, pistons disguised as left jabs, and right hands like sledgehammers, ruled over a large crop of ill-equipped challengers.

The native of Zywiec, Poland took on fellow Polish heavyweight Andrew Golota in his inaugural bout in the heavyweight division. Adamek was outweighed by more than 40 pounds, but took the fight to his larger countryman. He looked impressive in 5 rounds against the faded Golota, sending him packing in the 5th round.

Unlike David Haye, another former cruiserweight that moved up in weight in an attempt to break up the monotony and stranglehold of the Klitschko brothers, Adamek did not challenge for a title in his 2nd heavyweight fight. Adamek took another introductory bout, this time against former U.S. Olympian and fringe contender Jason “Big Six” Estrada.

After easily outpointing Estrada, Adamek moved on to log gritty decision victories over former title contenders Chris Arreola and Michael Grant. Rather than take the next logical step forward, Adamek took what many believed to be, a step back, when he took on Vinny Maddalone in December of 2009.

Adamek scored a 5th round TKO victory over Maddalone, and talks of an Adamek-Klitschko bout began to heat up yet again. It didn’t matter which one – the boxing public merely wanted to see Adamek against a Klitschko brother. The younger Wladimir Klitschko (IBF/WBO champion) was contractually obligated to fight Dereck Chisora, making that fight unavailable at the time. When Don King maneuvered Odlanier Solis into the WBC’s mandatory challenger spot, older brother Vitali Klitschko became unavailable. Adamek was left to look elsewhere.

Adamek eventually found an opponent in Kevin “The Clones Colossus” McBride (35-8-1, 29 KO). When Adamek takes on McBride this Saturday April 9, it will mark another lateral move against lightly-regarded competition thus far in his undefeated heavyweight run (5-0, 2 KO).

This fight will not be completely without intrigue, however. McBride is credited as the man to send the most recognizable heavyweight champion of the last 20 years, “Iron” Mike Tyson, into retirement. And while McBride lacks the hand and foot speed needed to combat the movement of Adamek, his heavy hands make him a danger to most in the heavyweight division that would be careless enough to get caught.

The dismal heavyweight division has staggered through an era in which Ukrainian giants, Wladimir and Vitali Klitschko, have grabbed 3 of the 4 major titles and thoroughly dominated every opponent to come their way over the last 3 years. The lack of available competition forced HBO to cut off business dealings with the Klitschkos, relegating them to European pay-per-view, experimental internet, and ESPN3.com broadcasts.

The arrival of Adamek in the heavyweight division, along with David Haye, signaled hope for the future. Adamek lacks the overwhelming size, ring intelligence, and brute strength of a Klitschko, as a result he is usually drawn into entertaining brawls. Adamek’s ready-made following on the East Coast of the United States, in addition to his fan-friendly style, make him a marketable commodity while he remains active in the sport.

Talk of a Klitschko-Adamek fight has injected some much-needed anticipation and excitement into the heavyweight division. As Adamek made his way up the ranks and inched closer to a shot at one of the Klitschkos, the quiet demand of said title fight has steadily grown.

Adamek’s progress has been slow, and at times puzzling, but he is at the cusp of where he and his handlers envisioned when he moved up to the heavyweight division. He is on a collision course with WBC heavyweight champion, Vitali Klitschko, having signed to take on the elder Klitschko in September of this year. The last stretch on the road to Klitschko goes right through a 37-year old McBride. A misstep, however, may derail an eagerly anticipated title challenge nearly 2 years in the making.