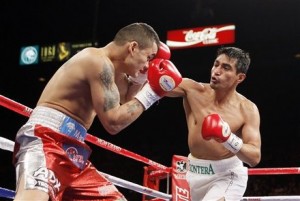 MGM Grand, Las Vegas, Nevada– There was no Cinderella story Saturday night at the MGM Grand, but Erik “El Terrible” Morales (51-7, 35 KOs) came closer than anyone imagined to pulling off the upset of the decade against a younger, bigger, and mega-aggressive Marcos Maidana (30-2, 27 KOs).

In the first round, the Argentine slugger, Maidana, jumped on Morales and put some serious hurt on the Tijuana native with a a feverish offensive output. Morales would finish the round with his right eye nearly swollen shut and the critics of the contest rallying the “I told you so” refrain.

However, as the fight progressed, Morales’ skill and craft found a way around Maidana’s physical advantages and turned an apparent mismatch into a candidate for Fight of the Year.

Moving smartly away from Maidana’s wide, looping punches, Morales was able to avoid the full force of the incoming shots while maintaining balance to score big with a bruising uppercut, an educated jab, and solid straight right hands.

Although shaken on occasion and clearly gassed from his sustained offensive output, Maidana kept coming forward and kept scoring with wide left hands that found a home on a completely one-eyed Morales.

With the score getting close, Maidana found the energy to close the show big, winning rounds eleven and twelve and ensuring the majority decision victory by scores of 116-112, 116-112, and 114-114. The Boxing Tribune also scored the bout 116-112 in favor of Maidana.

After the bout, the former three-division champ, Morales, sporting a hideously swollen right eye, boldly claimed that he should’ve gotten the decision and insisted on a rematch.

Guerrero fought a nearly perfect fight against the always-tough Michael Katsidis (27-4, 22 KOs), picking his spots and busting up the hard-charging Australian with a solid southpaw jab and picture-perfect straight left hand.

To his credit, Katsidis never stopped trying, even landing a few strong shots in the second half of the twelfth round, but the class and skill of Guerrero was too much and, despite the bravery, the warrior from down under was, once again, not up to the task of dealing with a world class lightweight.

The only controversy in the bout came via two point deductions against Katsidis for punching low in the eighth round and one point dedication against Guerrero for doing the same in the ninth.

After the bout, Kirkland trainer, 70-year old Kenny Adams collapsed in the dressing room and was taken to a local area hospital.

After an entertaining first round that Jose Miguel Cotto (32-3-1, 24 KOs) won on all three judges’ scorecards, Paulie Malignaggi (29-4, 6 KOs) settled into his groove in this welterweight contest and out-boxed an opponent who lost the urgency to win more and more with each passing round. Cut over both eyes from accidental butts, Malignaggi would get on his bike over the last several rounds and cruise to a one-sided unanimous decision with scores of 99-91, 99-91, and 97-93. The Boxing Tribune also scored the contest 99-91 for Malignaggi.

Garcia, the native of Philadelphia, PA, beat his veteran opponent to the punch throughout a competitive, but never in doubt, one-sided unanimous decision. The judges scores read: 100-90, 99-91, and 98-92. The Boxing Tribune also scored the bout 99-91 in favor of Garcia.