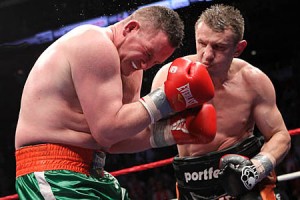 Top heavyweight contender Tomasz Adamek took a step toward a championship showdown with one of the Klitschko brothers, unanimously outpointing Kevin McBride on Saturday night.

Adamek (44-1 with 28 knockouts) has a deal in place to face either Vitaly or Vladimir Klitschko for either of their heavyweight championship titles sometime in September in Poland.

”When I moved to heavyweight, my dream was to get to fight for the heavyweight championship,” Adamek said. ”Now, I’ve made it. I’ll get that chance. I want that chance. This is my chance and I’m ready.”

Adamek dominated from the outset, using his speed to outscore and outpunch his opponent, winning every round on all three judges’ scorecards. Judge Robert Grosso had the fight 120-107 in favor of the Polish-born Adamek, who now lives in Kearny, N.J., while judges Lynn Carter and Larry Hazzard Jr. had the fight 119-108.

Robert Stieglitz of Germany retained his WBO super middleweight title Saturday when challenger Khoren Gevor of Armenia was disqualified in the 10th round for an intentional head butt.

The foul at 2:45 of the 10th round caused a deep cut above Stieglitz’ right eye. Both fighters wrestled each other to the ground before the fight was stopped.