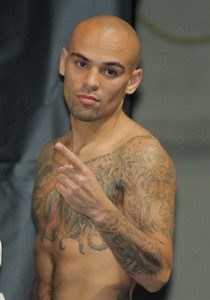 Collazo, who has been in the ring with the likes of Ricky Hatton, Shane Mosley, and Andre Berto, has had his career stalled in recent years by inactivity in a promotional deal with Don King which saw him only get in the ring six times in the last five years.

Now a promotional free agent, Collazo is self-managed and ready, less than ten days shy of his 30th birthday, to re-start a dormant career.

Collazo’s opponent, Gonzalez, has lost his last five contests and six of his last seven.

Salita, whose company is actually promoting the card, was blown away in one round by Amir Khan in a December, 2009 try at Khan’s WBA 140 lb. belt. Since then, Salita is 2-0 against club-level opposition.