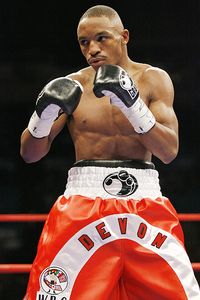 Coming off high-profile losses, Devon Alexander (21-1, 13 KOs) and Lucas Matthysse (28-1, 26 KOs) seek to stay relevant in a jr. welterweight division that threatens to pass them by.

The contest, taking place at The Family Arena in Alexander’s hometown of St. Louis, will be a mix of styles featuring the heavy-handed slugger, Matthysse, against the slick stylist, Alexander. With a Timothy Bradley-Amir Khan bout brewing for later in the Summer and Zab Judah capturing gold in recent weeks, both Alexander and Matthysse need a big win to stay near the top of the 140 lb. heap. The loser may fall completely off the radar.

In Matthysse’s last major contest, the Argentina native lost a close, split decision to Zab Judah in a November, 2010 IBF/WBO eliminator, despite coming on strong in the last half of the fight and even dropping his opponent in the tenth round. Two months later, Matthysse bounced back by sending DeMarcus Corley to the canvas nine times en route a TKO 8 victory.

In Alexander’s last contest, he dropped a ten round technical decision to Timothy Bradley in January’s unification of WBC and WBO 140 lb. titles when repeated headbutts and subsequent cuts put an end to the bout. The loss marked the second straight sub-par performance by the former WBC and IBF champ, the first being a lackluster unanimous decision over Andriy Kotelnik five months prior.

The undercard will likely feature IBF jr. middleweight champ, Cornelius Bundrage (30-4, 18 KOs) against mandatory challenger, Sechew Powell (26-2, 15 KOs). In a 2005 encounter, Powell knocked Bundrage out in just twenty-two seconds into a first round which saw a rare double knockdown occur during the first exchange of the fight.